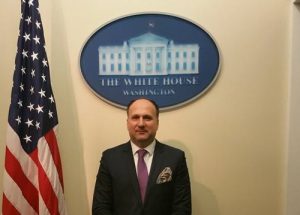 Hungarian American Coalition: On December 18, the White House hosted 40 leaders from ethnic communities, refugee aid and interfaith organizations to discuss the Administration’s approach to welcoming refugees while ensuring the safety and security of the American people. Max Teleki, President of the Hungarian American Coalition, was among the participants. The discussion focused primarily on the fallout from the refugee crisis resulting from the civil war in Syria.

Administration officials provided an overview of its policies for admissions, resettlement and integration of refugees, and of the US government’s overseas humanitarian efforts. Officials also highlighted the activities of the White House Task Force on New Americans.

Teleki reminded officials that 20 years after the Dayton Peace Accords, we are still living with the effects of the war in former Yugoslavia, which killed more than 100,000 people and displaced more than 2 million.  Teleki stated: “What do we really mean when we say never again?  Today’s wars in Syria and Iraq, too, are destroying families and communities, and long-term plans will be necessary to recover and rebuild.”

The migration crisis, fueled by the Assad regime’s terrorism against its own population and exacerbated by ISIL, has forever changed the landscape of both the Middle East and Europe, said Mr. Teleki.  European and American policies must face up responsibly to these ongoing humanitarian and political crises.

Prior to the White House meeting, the Arab American Institute (AAI) hosted attendees at a working lunch and discussion, including an update from Congresswoman Debbie Dingell (D-MI) on the Visa Waiver provision in the recently passed Omnibus Bill.

Mr. Teleki expressed his gratitude to Eldin Elezovic, President of the Congress of North American Bosniaks and survivor of the genocide in Bosnia-Hercegovina, who spoke eloquently about his life as a refugee and a new American.