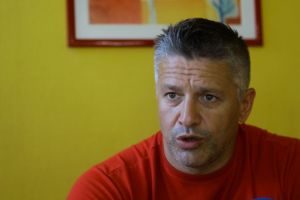 The recent arrest of the wartime defense commander of Srebrenica Mr. Naser Oric by the Swiss authorities, at the request of the Serbian government prosecutors, is nothing else but a continuation of the Serbian aggression against Bosnia and Hercegovina, and the genocide against the surviving Bosniaks. Let us remind you that Mr. Oric was acquitted of all charges by the International Crimes Tribunal for the former Yugoslavia at The Hague. Like many times in the past, the Serbian state and its political leadership are increasingly returning to the aggressive nationalist policies from the 1990s.

We are dealing with a politically motivated arrest initiated by the Serbian authorities, who have previously aslo broken bilateral agreements that were established at the highest state levels between Bosnia and Serbia. It is not a coincidence that this arrest has happened only weeks before the commemoration of the twenty year anniversary of the genocide in Srebrenica. This move is also a seen a slap in the face to all Bosniak survivors of genocide in Bosnia and Herzegovina. We strongly condemn all attempts made by the Serbian authorities, in trying to relativize the genocide as well as trying to equate the responsibilities of Bosniak victims and Serbian aggressors in the eyes of the international community.

We also believe that this act has been designed to achieve a digression of crimes perpetrated by the Serbian military and paramilitary forces during the war in Bosnia and Herzegovina, as well as to deflect attention from the recently announced United Nations Security Council resolution pertaining to the Genocide in Srebrenica. Ironically, by issuing an arrest warrant for Mr. Oric, the state of Serbia has yet again admitted to playing a major role in the aggression against Bosnia and Herzegovina.

With this kind of behavior, Serbia is undoubtedly indicating that they have never renounced their ultranationalist ambitions towards Bosnia and Herzegovina. By being a major factor of instability in the the southeastern Europe, the Serbian state has been responsible for deteriorating relations with Bosnia and Herzegovina, in particular with the Bosniaks, at the same time threatening the process of reconciliation and stabilization that can only be achieved through a recognition of truth about Bosnian genocide and justice for the victims. It is very worrisome that Serbia has been cultivating and promoting the ultra- nationalistic, anti-Bosnian, and anti-European views, that ought to be seen as a threat signal to all members of the European Union pertaining the questions related to Euro-Atlantic integrations.

From the state of Switzerland, we request an immediate release of Mr. Oric. We also request an apology to all Bosnian victims of genocide, because of the maltreatment of the Bosniaks who have honorably defended their country against the Serbian aggressors.

Despite the recent events, we are deeply convinced that this Serbian act of sabotage, yet again, will end up in a complete failure for the state of Serbia and its political leadership. We are also convinced that Commander Naser Oric will indeed show up at the commemoration of the twenty years of genocide in Srebrenica in July of this year.