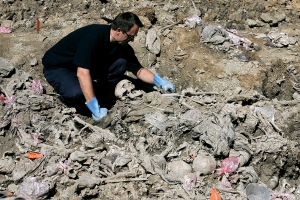 WASHINGTON — Immigration officials are moving to deport at least 150 Bosnians living in the United States who they believe took part in war crimes and “ethnic cleansing” during the bitter conflict that raged in the former Yugoslavia in the 1990s.

In all, officials have identified about 300 immigrants who they believe concealed their involvement in wartime atrocities when they came to the United States as part of a wave of Bosnian war refugees fleeing the violence there. With more records from Bosnia becoming available, the officials said the number of suspects could eventually top 600.

“The more we dig, the more documents we find,” said Michael MacQueen, anImmigration and Customs Enforcement historian who has led many investigations in the agency’s war crimes section. The accused immigrants, many of them former soldiers from Bosnia, include a soccer coach in Virginia, a metal worker in Ohio and four hotel casino workers in Las Vegas.

The effort to identify suspects included an appeal broadcast to Bosnians around the world in February, urging witnesses to come forward with any information about war crimes. Bosnians should be confident that “justice can be served in the United States despite the fact that many years have gone by and that the conduct occurred overseas, far away,” Kathleen O’Connor, a human rights prosecutor at the Justice Department, said in a message translated into Bosnian on the government-financed Voice of America network.

Evidence developed by immigration officials indicates that perhaps as many as half of the 300 Bosnian suspects in the United States may have played a part in Europe’s worst massacre since World War II: the 1995 genocide at Srebrenica, where Bosnian Serb forces executed some 8,000 unarmed Muslim boys and men.

“The idea that the people who did all this damage in Bosnia should have a free pass and a new shot at life is just obscene to me,” said Mr. MacQueen, who investigated Nazi suspects in the United States before turning his focus to the Bosnian war.

But the investigations have proven enormously complicated, sometimes dogged by years of delays and legal battles. Funding for the war crimes center at the immigration agency has been cut, officials said, and with just $65,000 last fiscal year for expenses like travel and translating, Mr. MacQueen routinely borrows a friend’s apartment when he travels to the Balkans to interview witnesses, he said. Officials say they do not have enough funding to chase every lead.

“The money absolutely makes a difference,” said Mark Furtado, a senior official at the agency.

Lawyers for some suspects fighting war crimes charges say federal officials have gone too far in linking longtime residents of the United States, some of them now American citizens, to crimes committed two decades ago in a foreign war zone.

“It’s guilt by association,” said Thomas M. Hoidal, a lawyer in Phoenix who represented two of a group of 12 Bosnian Serbs in Arizona now facing deportation over charges of war crimes.

Since the immigration agency opened its war crimes section in 2008, it has investigated immigrants linked to atrocities in conflicts in El Salvador, Ethiopia, Guatemala, Rwanda and other global hot spots. But no conflict has generated as much attention from American investigators as the Bosnian war, which killed more than 100,000 people and displaced two million others from 1992 to 1995 after the breakup of Yugoslavia.

Amid widespread lawlessness, all of the warring factions that fought in Bosnia — Serbs, Croats and Muslims — carried out brutal, ethnic-fueled attacks on civilians. But the Bosnian Serb forces, backed and supplied by the Serbian leader Slobodan Milosevic, were implicated in far more bloodletting than any other group as they sought a Serb-dominated Bosnian state.

In 2004, the United Nations declared the slaughter at Srebrenica, near an enclave protected by the United Nations, an official act of genocide. The International Criminal Tribunal for the Former Yugoslavia has convicted nearly 80 people, with verdicts upheld in January against five Bosnian Serb military officials.

But many offenders were able to get away.

When more than 120,000 Bosnian refugees began applying for American visas in the mid-1990s, they were required to disclose military service or other allegiances that might have suggested involvement in war crimes. But the system relied largely on the honesty of the applicants, and there was little effort to verify their statements.

It began with an arrest in Boston more than a decade ago. A series of tips, along with a book by a Boston Globe reporter, led federal agents in Massachusetts in 2004 to a construction worker named Marko Boskic, a Bosnian Serb accused of carrying out executions in the Srebrenica region. He was convicted of concealing his army service, then sent back to Bosnia and sentenced to 10 years in prison for crimes against humanity.

Immigration officials said the case showed that former soldiers and mercenaries implicated in Bosnian war crimes had been living openly, with little scrutiny or fear of exposure.

“All of these people really came into the United States under the radar,” said Lara J. Nettelfield, a scholar at Royal Holloway, University of London, who has written extensively on Bosnian war crimes. “There really wasn’t much attention given to this problem for years.”

For Bosnian Muslims, in particular, it has been painful to see suspected offenders living side by side with war refugees in the United States, said Hamdija Custovic, a Bosnian immigrant who leads the Congress of North American Bosniaks.

“There’s been a lot of covering up of what happened in Bosnia, and a lot of these people who were involved are still walking around,” Mr. Custovic said. “Whatever has been done to find these people is not enough. It’s tragic.”

Relying on a trove of Bosnian war crimes files and military rosters, federal officials have built cases against immigrants from New York to Oregon. In Kentucky, Azra Basic, a Croatian woman who was a guard at a military detention center, has been jailed and faces extradition on charges that she tortured some Serb prisoners and made them drink gasoline and human blood. And in Vermont, a Bosnian Muslim named Edin Sakoc was found guilty by a federal jury in January of lying to immigration officials about his role in a rape, two murders and an arson targeting Bosnian Serbs in 1992.

The efforts to deport most of the suspects have come in over 100 immigration proceedings that have not been made public.

In a case in eastern Ohio, a federal grand jury in December indicted an Akron foundry worker named Slobodan Mutic, a Bosnian Serb, on what appeared to be a run-of-the-mill charge of being in the United States on fraudulent immigration papers. The indictment did not mention that Mr. Mutic was the subject of a lengthy war crimes investigation.

In fact, Mr. Mutic was among nine Bosnian immigrants to the United States identified by Croatian officials as a suspect in war crimes committed in what is now Croatia, according to a classified 2008 State Department memo made public by WikiLeaks. Federal investigators are examining Mr. Mutic’s ties to the killings of a Croatian couple and other ethnic-driven violence during the Bosnian conflict, people with knowledge of the case said. His lawyer declined to comment on the case.

With a stepped-up focus on Bosnia since the arrest of Mr. Boskic in Boston, immigration officials say a total of 64 Balkan immigrants with ties to war crimes have left the United States after being expelled through legal proceedings or fleeing while under investigation. While most of the cases involve Bosnian Serbs, officials have also taken action against Bosnian Muslims and Croats who they believe participated in attacks against Serbs — a reflection, officials say, of their willingness to pursue Bosnian offenders of all types.

But building enough evidence to deport someone suspected of war crimes is not easy.

Bosnian military records, for example, indicate that Milan Trisic, a North Carolina truck driver, served in a Bosnian Serb military unit that was at Srebrenica at the time of the killings and in a unit implicated in a campaign of ethnic-targeted killings three years earlier.

In a phone interview, Mr. Trisic said the F.B.I. had approached him several years ago and that, along with his son Sladjan, he had agreed to meet with an agent to explain that he had not been involved in any atrocities. He said he had driven a truck in the war, not served in the military.

“It’s just talk,” his son said. “There’s no proof. They’re trying to blame him for something in the war. He wasn’t involved in any of that.”

Mr. Trisic has not been charged, but the investigation appears to be continuing. The F.B.I. declined to comment.

Nowhere are the difficulties more apparent than in Phoenix, which has a large Bosnian population and more war crimes investigations than anywhere else.

Twelve Bosnian Serbs who live in the area face deportation over war crimes, some at Srebrenica, in a long-running investigation. In a series of orders in 2013 that were not made public, an Arizona immigration judge found enough evidence to make the men eligible for deportation because they had concealed their service in the Bosnian Serb army, according to Christopher Brelje, a lawyer who represented them.

But because of backlogs in immigration courts, a second phase needed to determine whether they will actually be deported is not scheduled until 2019.

For the dozen Bosnians, the delay means a reprieve in confronting crimes they insist they did not commit.

Mr. Brelje said that while some of his Phoenix clients had been stationed with Serb forces in towns not far from Srebrenica, they had been “grunts in the trenches” securing perimeter positions, not executing Muslims.

Immigration officials “are painting too broad a brush,” he said. “They got excited and said, ‘Bad things happened over there; let’s punish some people.’ But these guys didn’t do anything wrong.”