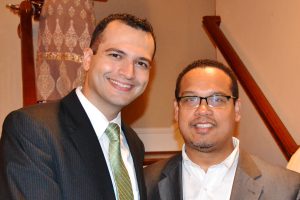 President of the Congress of North American Bosniaks (CNAB), mr. Hamdija Custovic, attended a fundraising event in Charlotte, NC for the United States Congressman, the Honorable Keith Ellison.  Speaking at the event, Mr. Custovic informed the attendees about the activities of CNAB and the current efforts of the organization to promote meaningful democratic reforms in Bosnia and Herzegovina (BiH).   He thanked Representative Ellison, the first Muslim in history to be elected to Congress, for recently joining the Bosnian Caucus in the U.S. Congress and for supporting the work of the Advisory Council for Bosnia and Herzegovina (ACBH) in Washington, D.C. CNAB president also talked about the need to stop genocide denial amid the ongoing propaganda by Serb ultra-nationalists to undermine efforts for peace, justice and long term sustainability of BiH. Mr. Ellison expressed his commitment to a more proactive U.S. engagement in Bosnia, emphasizing the importance of accelerating full Bosnian membership in the North Atlantic Treaty Organization (NATO) as a matter of U.S. national interests to ensure peace and stability in the region.