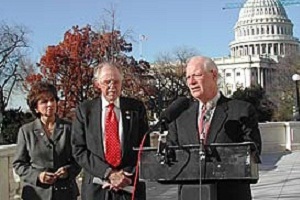 We are writing to you on behalf of the Congress of North American Bosniaks (CNAB), an umbrella organization representing Bosniaks in the United States and Canada, many of whom are survivors of genocide and victims of ethnic cleansing that occurred during the military aggression on the Republic of Bosnia and Herzegovina from 1992 – 1995.

As an organization whose primary mission is to preserve the truth about genocide and to promote peace and justice for Bosnia and Herzegovina, we want to give you our full support and thank you for introducing House Resolution 746 expressing support for the people of Bosnia-Herzegovina as they prepare for elections on October 12, and for reforms that will enhance the country’s prospects for Euro-Atlantic integration. We applaud your efforts to promote a better future for Bosnia-Herzegovina and its citizens.

Unfortunately, as you have pointed out, Bosnia-Herzegovina continues to struggle, almost 19 years after the Dayton agreement. The political stalemate is getting worse every year, with the Bosnian Serb leadership taking advantage of the inertness of the international community, and pushing their separatist and revisionist history agenda by blocking all efforts for normal governance and working to have Bosnia-Herzegovina declared a “failed state”. We believe that the policy of appeasement is a dangerous one, and that the United States and the European Union must act more forcefully to ensure Bosnia-Herzegovina takes its rightful place among the nations with a thriving democracy and with its multiethnic heritage fully intact.

Your resolution raises awareness about the responsibility that the United States and the rest of the world have to promote democracy and justice in Bosnia-Herzegovina. There can be no peace and justice until the issues caused by the Dayton constitution that plague Bosnia-Herzegovina today are directly resolved. As it is now, Bosnia-Herzegovina cannot thrive but can barely survive as a country. The United States engagement is required for the stalemate to be overcome. The Dayton peace accord was only supposed to be a temporary solution and not the strait-jacket that it has become so we will fully support reforms that will enhance the country’s perspective for a better future.

We will do our part to engage the Bosnian American community and all friends of Bosnia-Herzegovina and its people to call their representatives and ask them to support House Resolution 746.  Thank you again for your leadership and support of democratic reforms in Bosnia-Herzegovina.

On behalf of the CNAB Board of Directors,