Skip to Content
Home English “Što Te Nema?” – “Why Are You Not Here?” in Toronto 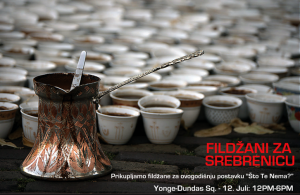 Institute for Research of Genocide Canada in cooperation with the Congress of North American Bosniaks and other Bosniak organizations and communities in Canada invites all friends of the truth about the aggression against the Republic of Bosnia and Herzegovina and genocide against its citizens and friends of justice for the victims of the worst crime after World War II in Europe, Genocide in Srebrenica, to magnify the event “Što Te Nema?” – “Why Are You Not Here?” –  Saturday, July 12, 2014, 12:00am – 8:00pm at Dundas Square, Toronto.

The Canadian Parliament unanimously adopted a resolution that called the crime in Srebrenica genocide.

“Što Te Nema?” (“Why Are You Not Here?” in Bosnian) is a public monument created as a response to Europe’s worst atrocity since World War II: the systematic killing of more than 8,000 Muslim men and boys in the UN-protected safe area of Srebrenica and the surrounding areas in Bosnia and Herzegovina in July of 1995.

“Što Te Nema?” translates into English as both, “Why are you not here?” and “Where have you gone?”. The title is borrowed from an old Bosnian song about waiting and longing for a loved one.

“Što Te Nema?” is collectively assembled and disassembled by people on city plazas and squares on the anniversary of Srebrenica genocide each year. The public participates by placing small, porcelain coffee cups on the ground and filling them with Bosnian coffee prepared on the spot throughout the day. The thousands of small porcelain coffee cups called fildžani are continuously collected and donated by Bosnian families all over the world. Their number increases each year, roughly corresponding to the growing number of bodies found, identified and buried to date. As a nomadic monument without a permanent physical place, “Što Te Nema?” consistently depends on the public’s active initiative and cooperation in order to exist. The involvement and participation that happen through this shared ritual allow for constant re-creation, re-interpretation and reproduction of personal and collective memory of the Srebrenica genocide.

“Što Te Nema?” has been set up on every July 11th for the past eight years with the help of local volunteers, groups and organizations in the following locations:

Please click on the link below to support bringing “Što Te Nema?” to Yonge-Dundas Sq. on Saturday, JULY 12: 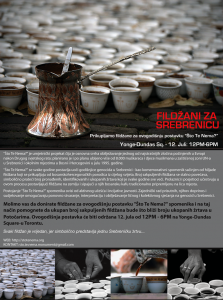