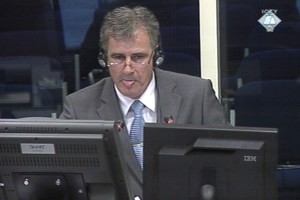 SARAJEVO, (FENA) – The Congress of North American Bosniaks (CNAB) and Institute for Research of Genocide Canada (IGC) sent an open letter to the Presidency and the Ministry of Foreign Affairs (MFA BiH), requesting that Gordan Milinic, former ambassador of Bosnia and Herzegovina in Russia and current employee of the Ministry of Foreign Affairs BiH is immediately dismissed from duty because, as the letter states, he demeans the integrity of victims and witnesses of aggression against the Republic of Bosnia and Herzegovina and the genocide against its citizens.

CNAB in the letter recalls that Milinic, testifying in favor of Karadzic, said that “Srebrenica was one big hoax and a prank.”

“This former Karadzic’s adviser misused the International Criminal Tribunal for the former Yugoslavia in order to revise historical facts.

Srebrenica genocide was confirmed by the United Nations, European Union, United States, Canada, both international courts and more than 20 other countries in their parliaments passed a special resolution on the observance of 11 July as a day of remembrance of the victims of the greatest crime after the Second World War in Europe,” the letter says.

CNAB and IGC warn that those who deny the decisions of international courts, which violate international law and trying to revise history in the name of defense of crimes and criminals, cannot be diplomatic representatives of the victims, “and the victim is the state of Bosnia and Herzegovina and all its loyal citizens and nations.”

“It is unacceptable for open deniers of the genocide to act in any capacity as representatives of the state of Bosnia and Herzegovina,” says the letter.