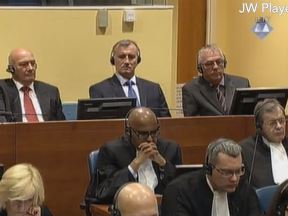 The Institute for Research of Genocide Canada (IGC), the Congress of North American Bosniaks (CNAB) and the Bosnian American Institute for Genocide and Education (BAGI) welcome the verdict of the International Criminal Tribunal for the former Yugoslavia (ICTY), which condemned the six former leaders of the self-proclaimed “Herceg-Bosna” for crimes against the Bosniak population and found that these crimes were orchestrated by a joint criminal enterprise headed by the first Croatian president Franjo Tudjman.

The objective of this joint criminal enterprise was to politically and militarily subjugate, permanently remove and ethnically cleanse Bosniaks from parts of Bosnia and Herzegovina which have been declared “Herceg-Bosna”, and that these areas were to be a part of the Croatian state, or to be declared a state within Bosnia and Herzegovina (based on the Republic of Srpska model).

It is particularly important that the Trial Chamber of the ICTY ruled that the conflict between the Croat Defence Council (HVO) and the Army of the Republic of Bosnia and Herzegovina was an international conflict – part of the aggression against the internationally recognized state of Bosnia and Herzegovina, and that the six high-ranking officials of the former so-called “Croat Republic of Herceg -Bosna ” and members of state and military leadership of Croatia were participants in a joint criminal enterprise.

Director of the Institute for Research of Genocide Canada

President of the Congress of North American Bosniaks

Chairman of the Bosnian American Institute for Genocide and Education