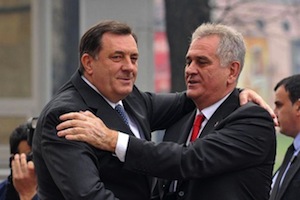 The Congress of North American Bosniaks (CNAB) strongly condemns the statements made by Serbian President Tomislav Nikolic after his meeting with Milorad Dodik, president of the smaller entity in Bosnia and Herzegovina. Nikolic referred to their meeting as a meeting of “most responsible people of two Serb states”. This kind of Serb nationalist rhetoric cannot be allowed to stand because it is a direct attack on the sovereignty of Bosnia and Herzegovina, and a violation of the Dayton agreement. Nikolic isa known radical ultranationalist, who supported Serbia’s expansionist policies in the 1990s which led to the war and genocide in Bosnia and Herzegovina, and caused wars in Croatia, Slovenia, and Kosovo.

It is disturbing that Bosnia and Herzegovina has been so undermined by the international community’s policies of appeasement, especially from the European Union, in allowing Serbia and Republika Srpska, to increasingly heat up the rhetoric and violate the sovereignty of Bosnia and Herzegovina as an independent nation. Only 17 years after the end of the war, it seems that the international community has already forgotten the painful lessons of dealing with Serb nationalism with total disregard for the stability of the region. It should come as no surprise that Nikolic is also not willing to compromise on the recognition of Kosovo as an independent nation.

These comments are followed up by testimony of Milorad Dodik at the trial of the war criminal Radovan Karadzic, who orchestrated ethnic cleansing and genocide in Bosnia and Herzegovina. Milorad Dodik shamelessly called Karadzic a “freedom fighter” and supported his actions to carve out the so called “Serb republic”.

And to top it off, Vuk Jeremic, former Serbian Minister of Foreign Affairs, the current president of the UN General Assembly has attempted to organize an outrageous conference on the “Role of International Criminal Justice in Reconciliation”, whose sole purpose is to take revenge against the ICTY for prosecuting war crimes in the former Yugoslavia, to undermine this institution’s ongoing role and promote revisionist history. It is absolutely outrageous that one of the panelists is former Canadian general Lewis Mackenzie who is a supporter Serb policies, and played a shameful role as a UNPROFOR official in Bosnia and Herzegovina. He was even accused of participating in rapes of Bosniak women, although he was never prosecuted for these allegations. In the past,when he visited Washington General MacKenzie was represented by the public relations firm of Craig Shirley and Associates which is closely identified with the Serbian government and was paid for speaking engagement. It should be noted that majority of the well known experts on the topic have declined or pulled out of the conference. We welcome the news that the United States, Canada and more than two thirds of UN member nations have boycotted the event. We are especially grateful to the Hashemite Kingdom of Jordan for actively protesting against this shameful event, and for organizing a press conference today which will give the victims of genocide in Bosnia and Herzegovina an opportunity to address the media.

We call upon the Bosniak politicians, and all pro-Bosnian forces to speak out and protest in the greatest legal extent possible against these inflammatory statements and actions. We urge the United States and the European Union to stop their policies of appeasement, and take the necessary steps to normalize the situation in Bosnia and Herzegovina and the region. We warn that if nothing is done to alter Serb nationalist agenda, Bosnia and Herzegovina and Kosovo will be engulfed in a perpetual state of ethnic tensions that will eventually lead to another violent conflict. We request the United States Department and European Union issue a statement condemning in strongest terms possible increased nationalist and expansionist rhetoric that comes from Serbia.