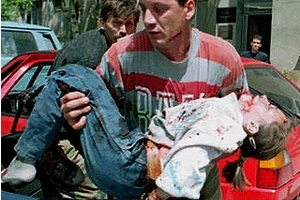 The Congress of North American Bosniaks (CNAB) would like to commemorate the Siege of Sarajevo that lasted from April 6, 1992 to February 29, 1996, during the war of aggression on the Republic of Bosnia and Herzegovina (B-H).

The Siege of Sarajevo was the longest siege in the history of modern warfare. It is estimated that during the siege, more than 12,000 people killed and 50,000 wounded, 85 percent were civilians. The Siege of Sarajevo not only marked the start of the war of aggression, but also the beginning of genocide and ethnic cleansing throughout Bosnia and Herzegovina.

In 2003 the International Criminal Tribunal for the former Yugoslavia (ICTY) convicted the first commander of the Republika Srpska para-military force and former Yugoslav People’s Army Sarajevo-Romanija Corps, Stanislav Galic, for the crimes against humanity committed during the Siege of Sarajevo. Other convictions include Dragomir Milosevic, the Serb general who replaced Galic as commander, was found guilty by ICTY in 2007, and the former Chief of the General Staff of the Yugoslav Army, General Momčilo Perišić, was sentenced to 27 years in prison in 2010 for his role in aiding and abetting the murder of civilians. 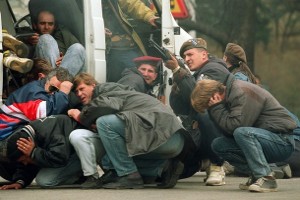 The residents of the capital city of Sarajevo have historically lived in tolerance and diversity; in a city where Christianity, Islam and Judaism flourished side by side for centuries. Unfortunately, Sarajevo was the object of aggressor’s siege whose goal was to destroy its multiethnic fabric and eliminate any semblance of religious and cultural cohabitation. Today, we remember the heroic perseverance that Sarajevo endured in its fight to maintain the spirit of peace and coexistance during the four years of its siege.

In order to prevent genocide in the future and in solidarity with the April Genocide Prevention Month (a worldwide movement commemorating past genocides and campaigning for an end to mass atrocities), CNAB is remembering victims of genocide and honoring the survivors. In paying tribute to this day, CNAB pledges to advocate for justice, peace, and democracy because it believes that to rebuild the bonds of humanity, it is imperative that those responsible for genocide and ethnic cleansing be brought to justice. The struggle to seek justice for the victims of genocide must continue. 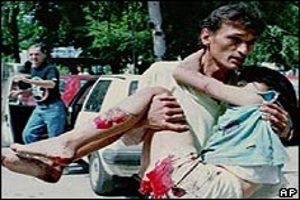 CNAB strongly encourages the United States, Canada and the international community to re-commit its efforts in the campaign against genocide and to bring to justice indicted war criminals, and for all people of good will to help combat genocide denial and those who would like us to forget the truth about genocide and the war in Bosnia and Herzegovina.