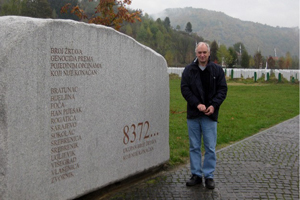 Dear Members of the USHMM Council:

On behalf of the survivors of ethnic cleansing and genocide in Bosnia and Herzegovina (BiH) we are writing to express our deep concerns regarding the offensive and hurtful statements made by USHMM Fellow, Mr. Michael Dobbs.

Despite not having any prior qualifications in the history of the Bosnian war or genocide studies, Mr. Dobbs has been tasked with covering the Ratko Mladic trial and the Srebrenica Genocide as a blogger on the Foreign Policy website through the “Mladic Files”, a project sponsored by the UHSMM.  Initially, we fully supported this initiative because it aimed to raise awareness about the genocide that occurred in Srebrenica, a genocide that is still to this day denied by many. It is important to mention that although we continue to be extremely grateful with the work that the USHMM has done to promote genocide awareness in BiH, among which is the Srebrenica genocide exhibit in Washington, D.C., we must also express our dismay regarding the execution of the “Mladic files” project, specifically with Mr. Dobbs who has made some serious blunders that are too offensive to ignore.

While Mr. Dobbs appears well intentioned, he has made several irresponsible statements that have appeased Serbian apologists and genocide deniers, and questioned the facts regarding the genocidal intent of the Serbian nationalists to systematically wipe out the non-Serb people and completely destroy the multiethnic fabric of BiH which has for centuries represented a unique example of multiculturalism in Europe. We are writing to you because Mr. Dobbs has refused to apologize for these mistakes, and he continues to undermine the truth regarding the war in BiH and the genocide against all of the non-Serb people that were targeted for extermination.

In November of 2011, we sent the USHMM Committee on Conscience a letter protesting his outrageous remarks in which he questioned the use of the term “genocide” thus insulting the survivors and victims of genocide in the process. Mr. Dobbs stated in an October 31, 2011 post titled “Defining Genocide”:

“‘I must admit that I find it difficult to use [in relation to Srebrenica] the word genocide, which conjures up images of the Holocaust… In the popular culture, at least, when we talk about “genocide,” we think about the killing of an entire race or ethnic group.”

Dr. Marko Attila Hoare, a well-known historian of the Balkans and the former Yugoslavia, described it the incident by stating that it was “incredible that a Fellow of the USHMM should somehow be guided by ‘popular culture’ when considering the meaning of genocide – instead of by expertise in the history and literature of the study of genocide”.  Srebrenica genocide is one of the most documented and undeniable cases of genocide in modern history. As such, it has been recognized by the International Court of Justice (ICJ), the International Tribunal for the Former Yugoslavia (ICTY), as well as many other governmental and academic institutions around the world including the United States Congress and the parliaments of Canada and the European Union (EU).

The second incident occurred just a couple of weeks ago, when Mr. Dobbs wrote a shocking article titled “In Defense of the Serbs” where he tried to explain why the Serb nationalists committed the atrocities in BiH. Mr. Dobbs stated that the Serbs had some “legitimate concerns” and were attempting to “protect large Serb minorities” and that the western governments were hypocritical for allowing the breakup of Yugoslavia.

“In fact, Serbs had some perfectly legitimate concerns both prior to and during the war that are often overlooked by western commentators who have painted an excessively black-and-white picture of the conflict. Foremost among these concerns was the security and rights of some two million Serbs living in the breakaway republics of Croatia and Bosnia …I am struck by a contradiction in western policy to the former Yugoslavia. Europe, supported by the U.S., recognized the independence of the breakaway republics… The practical effect of these decisions was that Croats and Muslims were given the right to secede from Yugoslavia, but Serbs did not have the right to secede from Croatia or Bosnia. “

The Congress of North American Bosniaks (CNAB) and the Institute for Research of Genocide in Canada (IGC) voiced our concern in letters to the Editor of Foreign Policy Magazine pointing out that the breakup of Yugoslavia was caused by Slobodan Milosevic and the Serbian aggression against its neighbors. We emphasized that a comparison of the right to secede was completely inaccurate since the Serb nationalists attempted to forcibly carve out territory that never existed before through campaigns of ethnic cleansing and genocide.  All six Yugoslav republics, including Serbia, had the same right to secede as BiH or Croatia.

We received a response from Mr. Dobbs who remains unapologetic and once again managed to insult the victims by saying that “it is wrong to blame one side exclusively for all the evil inflicted by the war.”

We urge you think about what the Holocaust victims would feel if Mr. Dobbs wrote an article “In Defense of the Germans” that claimed that Hitler and the Nazis had legitimate concerns to attack others around them despite the fact that over 6 million innocent Jews died in the process. In addition, imagine if he had gone on to say that Nazis cannot be blamed exclusively for the evil that was inflicted by their policies.

We believe the UHSMM has the responsibility to ensure that the coverage of the Ratko Mladic trial and the Srebrenica Genocide is done in a manner that is consistent with the recognized scholarly work already done on the subject of the breakup of Yugoslavia and not distort the established judgments of the ICJ and ICTY regarding the Serbian campaigns of ethnic cleansing and genocide in BiH.  The victims of the Bosnian genocide deserve someone who will not try to justify the war crimes and atrocities committed against them. We deserve someone who will fight against genocide denial and look to promote uncompromising truth, justice, and accountability for the crimes that were committed.

We respectfully ask that you that you sanction Mr. Dobbs as your Fellow for his irresponsible, untruthful and hurtful comments on the Bosnian war and genocide and prevent any future denial of genocide and appeasements of the perpetrators by the people associated with the USHMM.