Skip to Content
Home English Michael Dobbs: An innocent in the Bosnia controversy 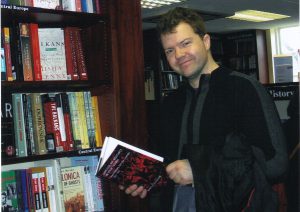 There is a scene in the film ‘Bean’, in which Rowan Atkinson’s Mr Bean, mistaken for an expert, is forced to give a speech about a painting in an art museum, about which he knows nothing. Trying to think of something to say, he points out that the painting is ‘quite big, which is excellent, because if it was really small, you know, microscopic, hardly anyone would be able to see it’. That scene sometimes comes to mind when reading Michael Dobbs, a Fellow at the United States Holocaust Memorial Museum (USHMM) who blogs for Foreign Policy magazine. For reasons that are beyond me, Dobbs has been tasked by these two bodies with investigating and writing about the Bosnian war, Srebrenica massacre and Ratko Mladic trial – despite apparently having no prior knowledge or expertise about these topics, or about the topic of genocide.

Dobbs is a well intentioned individual who tries hard to be balanced and objective. He writes frankly about the horrors of the Bosnian war. He consequently comes under regular vicious attack from the creepy-crawlies of the Srebrenica genocide-denial lobby and has been forthright in confronting them. He responds to criticism in a fair and measured way. Yet it’s as if the USHMM and Foreign Policy had simply walked into a random bar, pulled out a random Joe Bloggs, and told him to write about Bosnia and genocide. In October 2011, he wrote ‘I must admit that I find it difficult to use [in relation to Srebrenica] the word genocide, which conjures up images of the Holocaust… In the popular culture, at least, when we talk about “geno-cide,” we think about the killing of an entire race or ethnic group.’ That a Fellow of the USHMM should be guided by ‘popular culture’ when considering the meaning of genocide – instead of by expertise in the history and literature of the study of genocide – is incredible. It is, on the other hand, not in the least incredible, but wholly predictable and understandable, that his comment should have caused enormous offence among Bosniak people, prompting a letter of protest to the USHMM from the Congress of North American Bosniaks, Institute for the Research of Genocide Canada and Bosnian American Genocide Institute and Education Centre.

Now, Dobbs has put his foot in it again, with anarticle entitled ‘In Defense of the Serbs’, containing his pearls of wisdom regarding the international recognition of Bosnian and Croatian independence in 1991-1992:

‘Looking back at the start of the Yugoslav wars two decades later, I am struck by a contradiction in western policy to the former Yugoslavia. Europe, supported by the U.S., recognized the independence of the breakaway republics. In other words, the borders of the multi-ethnic state that resulted from the Versailles conference decisions of 1919 (see photograph above) were not inviolate. On the other hand, the international community (in the form of the Badinter commission set up by the European Union) also decreed that the borders of Croatia, Bosnia, and the other republics could not be changed simply because a minority wished to secede.

For what it is worth, my own personal view is that the breakup of Yugoslavia was inevitable, just as the breakup of the Soviet Union was inevitable. On the other hand, the United States and Europe (the nations that created Yugoslavia in the first place) should have been much more vigorous about establishing and enforcing rules for the breakup that guaranteed minority rights.

To use a phrase attributed to the French statesman Talleyrand, leaving two million well-armed Serbs in other people’s republics was “worse than a crime.” It was a gross error of political judgment.’

Two decades since the start of the Bosnian war, and a Fellow of the USHMM and writer for Foreign Policy can do nothing better than trot out the same, tired old sophistry that was being peddled by the Serb nationalists back then. It’s as if all the scholarship on the subject of the break up of Yugoslavia and recognition of new states, written in the interval by Richard Caplan, Michael Libal, Josip Glaurdic and others, simply did not exist. Dobbs is making a point that has been extensively addressed and refuted by real experts on the subject over a period of twenty years.

It would take a lot of space to refute all the misconceptions in Dobbs’s small passage above, so let me pick just one. There was, of course, no ‘contradiction’ in the policy of the international community as regards the right to secede of Serbs and of non-Serbs in the former Yugoslavia in 1991-1992. Dobbs claims that ‘The practical effect of these decisions [by the international community] was that Croats and Muslims were given the right to secede from Yugoslavia, but Serbs did not have the right to secede from Croatia or Bosnia’. This is false: ‘Croats and Muslims’ were not given the right to secede from Yugoslavia. Yugoslavia was recognised as being ‘in the process of dissolution’, and the six constituent republics were recognised as the entities that inherited its sovereignty. Thus, it was the six republics – including Serbia – not the ‘Croats and Muslims’, whose right to independence was recognised. Serbia was not treated differently from Slovenia, Croatia or Bosnia in this respect, and was entirely free to seek and receive international recognition of its independence, just as they did.

The right of the Serbs of Croatia and Bosnia to secede from their respective republics was not recognised; neither was the right of the Croats of Bosnia. Nor of the Muslims/Bosniaks of Serbia’s Sanjak region. Nor of the Hungarians of Vojvodina, within Serbia. Nor of the Albanians of Macedonia and Montenegro. Nor, at the time, of the Albanians of Kosovo. In fact, the only group on the territory of the former Yugoslavia whose carving out of a wholly new entity has ever been recognised by the international community is the Bosnian Serbs. Thus, at Dayton, the ‘Republika Srpska’ was recognised, whereas the Bosnian Croats’ ‘Croat Republic of Herceg-Bosna’ has been dissolved, and the right of the Bosnian Croats to establish their own entity within Bosnia has been consistently denied.

It is difficult to believe that anyone could think about this for even a few minutes before realising that the ‘contradiction’ Dobbs posits is no contradiction at all. But I’m not suggesting he’s being insincere; merely that he hasn’t bothered to think seriously about this, let alone read anything much – if at all – on the subject. Hamdija Custovic, Vice-President of the Congress of North American Bosniaks, has quite rightly written another letter of protest toForeign Policy about Dobbs’s article. What saddens me about this is not that Dobbs’s views are particularly outrageous – as I said, I believe he is a well intentioned individual trying hard to be balanced and objective. It is that respectable bodies like the USHMM and Foreign Policy consider it acceptable to provide a lot of space and opportunity for someone with no expertise on the former Yugoslavia or the Bosnian genocide to write about them, as if the subject wasn’t important enough to recruit a proper expert who actually has something informed to say.

The victims of the Bosnian genocide deserve better than this.