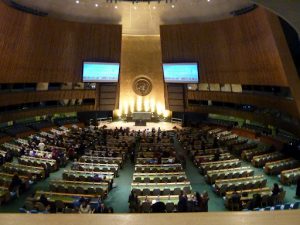 The Congress of North America Bosniaks (CNAB), in cooperation with the Institute for Research of Genocide Canada (IRGC), and on behalf of the victims of genocide who are currently residing in North America, are strongly protesting against the Serbia’s candidacy for the Chair position of the 67th Session of the General Assembly of the United Nations.

Our protest is based on the following facts:

2. The aggression against the Republic of Bosnia and Herzegovina and genocide against Bosniaks are the essence of the joint criminal enterprise conducted in the 90’s by Serbia and Montenegro.

3. The intent of these genocidal acts, based on Greater Serbia project, was to occupy the Republic of Bosnia and Herzegovina, and to attempt the extermination of Bosniaks, or their reduction to insignificant ethnic group.

4. The aggression against the Republic of Bosnia and Herzegovina and genocide against Bosniaks were planned by Serbia and Montenegro, and ordered from the respective political and military position and executed as planned, in a systematic and organized fashion.

5. The International War Crimes Tribunal (ICTY) found that:
Slobodan Milosevic “was a participant in a joint criminal enterprise, which included the Bosnian Serb leadership, whose goal and intentions were to destroy in part the Bosnian Muslims as a group “(ICTY, Prosecutor v. Slobodan Milosevic). Serbia was convicted by the International Court of Justice for not preventing genocide in Srebrenica in 1995. Serbia still has not gone through the process of dealing with crimes and responsibility from the past. Serbia still openly denies that genocide took place, a fact that was confirmed by the decisions of the International Criminal Tribunal for former Yugoslavia, International Court of Justice and several national courts.

6. Collaborators of the aggression, authorities and officials of a smaller entity in Bosnia and Herzegovina under the direct management, organization, command, participation and support of the state of Serbia and Montenegro occupied territory of the Republic Bosnia and Herzegovina and participated in genocide, crimes against humanity and war crimes against Bosniak population.

7. A smaller entity in Bosnia, Republika Srpska, led by Radovan Karadzic, Momcilo Krajisnik, Biljana Plavsic and other war criminals was a direct result of aggression and genocide.

These are historical facts, proven by the scientific research institutions around the world, deeply etched in the minds of victims of aggression and genocide. Based on this information only, we consider it unacceptable and morally and politically harmful to the United Nations to allow the country responsible for the gravest crimes committed in the 90’s, guilty of starting four wars in the Balkans to be nominated for the position of the Chairman of the General UN Assembly.