Skip to Content
Home English CNAB welcomes the release of Jovan Divjak, the retired general of the Bosnian Army 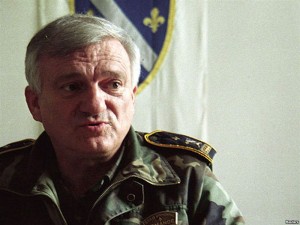 The Congress of North American Bosniaks (CNAB) welcomes the news of release of Jovan Divjak, former General of the Bosnian Army, in Vienna on Friday. An Austrian court has rejected Belgrade’s request that general Divjak be extradited to Serbia for a false and politically motivated accusation of war crimes in the “Dobrovoljacka” case.  General Divjak is a patriot who served his country Bosnia and Herzegovina (BiH) honorably when it came under the attack from the forces of Serbia and Montenegro following its declaration of independence in March of 1992.

It is an outrage that Serbia continues to issue arrest warrants in this case, which has been found on numerous occasions to be without merit by the International Criminal Tribunal for the Former Yugoslavia (ICTY), an authoritative body established by  the United Nations to prosecute serious crimes committed during the wars in the former Yugoslavia.  Serbia continues its aggression against Bosnia and Herzegovina, using false accusations and frivolous arrests of citizens of Bosnia and Herzegovina.  In the case of Dr. Ejup Ganic, the UK court denied the Serbian extradition request in July of 2010 after several months of proceedings that were, in the words of Judge Timothy Workman, “…being used for political purposes.”  Same was the case with Ilija Jurisic; another Bosnian citizen falsely arrested and sentenced by Serbia to 12 years in prison, and was thankfully released after months of protests and appeals in November of 2010.  The latest false imprisonment of General Divjak is further proof that Serbia is not sincere in its efforts to reconcile with its neighbors, especially when it comes to taking full responsibility for its past policies of aggression and genocide.

Instead of taking responsibility for its actions, Serbian authorities continue to undermine Bosnian sovereignty and the rights of its citizens, and to intimidate their way into averting blame for atrocities committed during the war from Serbia onto other countries in the region. This is particularly easy for them to do in Bosnia where Bosnian Serb representatives also work tirelessly to undermine Bosnian state authority and are continuing a practice of revisionist history to justify their actions. CNAB has warned on several occasions that Serbia continues to be a source of political instability in the region, particularly in its policies towards Bosnia and Herzegovina and the mainly Bosniak southern region of Sandzak.

CNAB demands that all further extradition requests for detainment of Bosnian citizens who defended their country from Serbian aggression, be categorically dismissed by the international community.  Furthermore, we call upon the United Nations, the United States, Canada, and the European Union, to take notice and act swiftly to hold Serbia accountable for its actions of continued infringement on Bosnian sovereignty and destabilization of the Balkans. We also request of the Bosnian government officials to take all means necessary to protect its citizens against attacks on its sovereignty and the freedom of its citizens to travel and not be subjugated to false arrests.