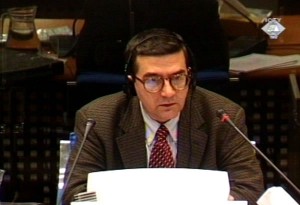 Office of the President
The University of British Columbia
6328 Memorial Road
Vancouver, BC Canada V6T 1Z2

The Institute for Research of Genocide of Canada {IRGC} was informed that Srdja Trifkovic, a Serbian-American ‘scholar’, will be holding a lecture on Thursday February 24th at 5pm at the University of British Columbia . It is organized by the Serbian Students Association.

IRGC is shocking that the University of British Columbia would allow Srdjan Trifkovic, who has repeatedly and openly denied the Srebrenica genocide to speak at this respectable academic institution.

Denial of genocide is widely considered to constitute a form of racist hate propaganda that is incompatible with Canadian values. Recently, the Parliament of Canada has recognized the Bosnian Genocide that took place in the enclave of Srebrenica in July 1995.

In 2004, the Holocaust survivor, Judge Theodor Meron, presided over the appellate judgement of Radislav Krstic when the International Criminal Tribunal unanimously ruled that:

“By seeking to eliminate a part of the Bosnian Muslims, the Bosnian Serb forces committed genocide. They targeted for extinction the 40,000 Bosnian Muslims living in Srebrenica, a group which was emblematic of the Bosnian Muslims in general. They stripped all the male Muslim prisoners, military and civilian, elderly and young, of their personal belongings and identification, and deliberately and methodically killed them solely on the basis of their identity. The Bosnian Serb forces were aware, when they embarked on this genocidal venture, that the harm they caused would continue to plague the Bosnian Muslims. The Appeals Chamber states unequivocally that the law condemns, in appropriate terms, the deep and lasting injury inflicted, and calls the massacre at Srebrenica by its proper name: genocide. Those responsible will bear this stigma, and it will serve as a warning to those who may in future contemplate the commission of such a heinous act.”

IRGC calls on all Canadians, friends of truth and justice to protest against Trifkovic’s lecture at the University of British Columbia

IRGC will send a request to the Canadian Parliament and Government to ban Trifkovic’s lecture.

On behalf of more than 50.000 Canadians, Bosnian origin, ost of them victims of the Bosnian genocide, IRGC invites you using your powers to deny Trifkovic’s lecture the University of British Columbia.