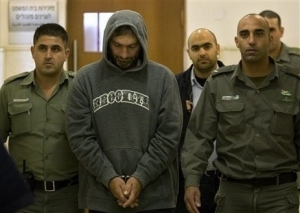 The Congress of North American Bosniaks (CNAB), the Institute for Research of Genocide Canada (IRGC), and the Bosnian American Genocide Institute and Education Center (BAGI) welcome the news of  the arrest and remand of Aleksandar Cvetkovic by the Israeli police following an extradition request by the government of Bosnia and Herzegovina. Aleksandar Cvetkovic is a Bosnian Serb who moved to Israel in 2006 and is accused of direct involvement in  the cold blooded execution of more than 1,000 Bosniak civilians in the Srebrenica Genocide.  After the fall of Srebrenica, a United Nations “protected enclave”, more than 8,000 unarmed Bosniaks were executed over several days and buried in mass graves throughout eastern Bosnia. This is the worst single atrocity in Europe since the Holocaust and documented by the International Court of Justice as an act of genocide.

We  expect swift extradition of this monstrous war criminal to Bosnia and Herzegovina so he can face justice  which he managed to escape for more than 15 years. This arrest follows the news of another Bosnian Serb, Branko Popic, who was arrested in Florida, United States of America, for lying to the Immigration authorities of his involvement in the Genocide and extradited to Sarajevo to face justice.  We are also pleased that another suspect, Bozidar Kuvelja, was arrested on Monday  in the Bosnian town of Cajnice, for his direct involvement in the Srebrenica genocide.  To date, a total of 14 suspects have been convicted of war crimes in the Srebrenica Genocide by the he UN war crimes tribunal for the former Yugoslavia in The Hague and another 12 by the Bosnian war crimes court with 11 others awaiting verdict.

Justice has been too slow considering that more than 8,000 Bosniak civilians were brutally murdered in the area of Srebrenica only, with more than 100,000 Bosnian citizens killed, many more wounded, and over 1,200,000 expelled from their homes. We call upon the international community to act with a higher sense of urgency in arresting all suspected war criminals and extraditing them to Bosnia and Herzegovina to face justice.  Furthermore, we urge the authorities to interrogate the suspects in order to bring about more arrests. More needs to be done by the Serb authorities and those Serbs who witnessed war crimes but have yet to come forward.  It is imperative that the entire community comes together to make sure war criminals are not roaming the world as free men. There can be no peace and reconciliation in Bosnia and Herzegovina until war criminals are brought to justice.