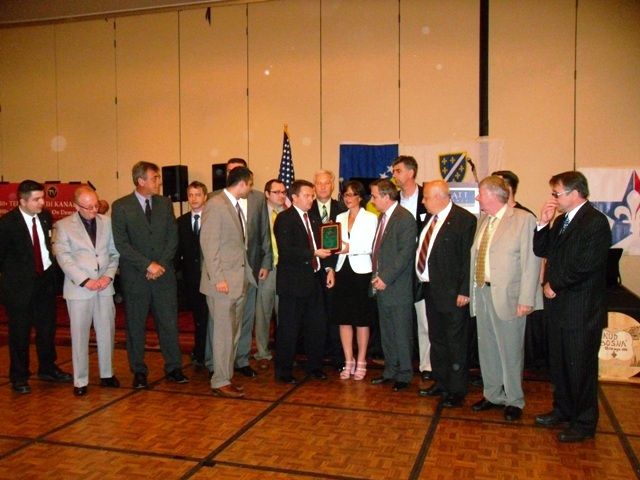 On May 30th at the St. Louis bookstore Novella, CNAB organized a promotion of Florence Hartmann’s latest book Peace and Punishment. In front of 40 attendees, the opening speech was given by Kemal Hamulic, a member on the Board of Directors for the Congress of North American Bosniaks.  In his opening speech Mr. Hamulic introduced two important panellists Mrs. Sanja Seferovic-Drnovsek from the Institute for Research of Genocide in United States of America and Professor Emir Ramic from the Institute for Research of Genocide- Canada.

Mrs. Drnovsek talked about her experiences when she lived and worked in Belgrade at the time of Slobodan Milosevic’s regime and reading Mrs. Hartmann’s book brought back those experiences for her. Sanja Drnovsek explained the effect this book had on her due to the fact that Mrs. Hartmann exposes the political doings behind closed doors and as a result Drnovsek’s whole perspective on the aggression of Bosnia and Herzegovina became crystal clear.

Professor Ramic spoke about the judicial consequences private and public deals between foreign politicians and key politicians from the Balkans had in the international tribunal in The Hague. His investigation and data has been deeply acknowledged not only in Hartmann’s latest book but also recognized on the international stage. Ramic’s complete publication can be found here. Florence Hartmann then described her personal experience as an internal source to the Serb aggression and genocide on Bosnia and Herzegovina which also took place individually in certain parts of the country at the very beginning of the hostility. In Bosnian, Mrs. Hartmann spoke about her own work while she was in Belgrade and her trips to eastern Bosnia which was at that time under Serb control. She also discussed the problems she came across as a journalist in Bosnia and Herzegovina and all the pressure she had to deal with from the Serbian Army and many others attempting to censor her. She then talked about her work during her time in The Hague and the consequences she faced as a result of her research and exposing the truth.

At the end of the presentation Florence Hartmann agreed to answer a few questions from the audience and sign everyone’s book.  Both Mr. Hamulic and Mrs. Hartmann invited all individuals with a pro-Bosnian view to use Peace and Punishment as a starting point for future work because, as in the words of Florence Hartmann “the truth belongs to all” and the facts stated in her book need to be used so that good can defeat evil.