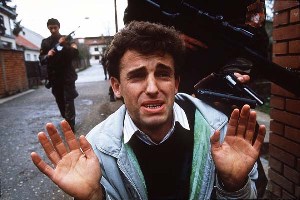 April of 1992 marked the beginning of brutal war of aggression on the sovereign country of Republic of Bosnia and Herzegovina, while its citizens became victims of genocide, ethnic cleansing, and destruction of homes and property.  The result of such brutal aggression which came from neighboring Serbia and with help of their proxy Bosnian Serb paramilitary foces operating in Bosnia were catastrophic, with over million people expelled from their homes, 250,000 killed and wounded, thousands destroyed historic sites, homes, schools, and over 50,000 raped Bosniak women.
CNAB calls on all Bosniaks to commemorate the Bijeljina massacre, beginning of the attacks on cities around Bosnia and Herzegovina, and the Siege of Sarajevo that lasted from April 6, 1992 to February 29, 1996, the longest siege in the history of modern warfare.  During the siege, more than 12,000 people killed and 50,000 wounded, of which 85 percent were civilians.
In paying tribute to this month of Aggression on Bosnia and Herzegovina, CNAB pledges to advocate for justice, peace, and democracy. It is imperative that we continue to seek justice for victims of genocide and aggression who lost their lives, homes, and loved ones in their fight for freedom and democracy. We must do all that we can to promote justice,  pease, and democracy, and the best way to do that is to remember them and ensure that it never happens again.
CNAB Board of Directors