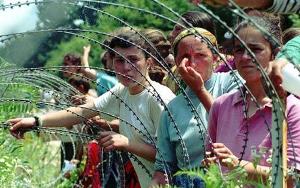 Congress of North American Bosniaks (CNAB) expresses its dismay and disappointment with a severely deficient resolution on Srebrenica passed by Serbia’s parliament on March 30, 2010, that falls far short from the unconditional recognition of genocide and aggression on Bosnia.

Instead, Serbia’s parliament only apologized for failing to prevent the killing of more than 8,372 men, women, and children in Srebrenica. This political move once again shows that Serbia is not willing to accept full responsibility for its actions and involvement in aggression and genocide in Bosnia.

Survivors of genocide and aggressions will continue to press for the truth and justice for all victims of these horrific crimes.  The fact that Serbia passed the resolution does not absolve it from its responsibility for war crimes and genocide. CNAB will continue to press that the International Court of Justice (ICJ) release the evidence that was sealed in an illegal deal with Serbia and Montenegro that shows direct involvement of these countries in the war of aggression and genocide in Bosnia and Herzegovina. This had a direct impact on the ruling in the lawsuit of Bosnia and Herzegovina (BiH) against Serbia in front of the International Court of Justice (ICJ). In June of 2009, these documents were circulated which contained signatures of judges Theodor Meron and Fausto Pocar of the Hague tribunal, dated September 20, 2005 and April 6, 2006. The documents are in regards to the decision of the International Criminal Tribunal for the former Yugoslavia (ICTY) which, if authentic, confirm the existence of an agreement between the International Court of Justice (ICJ) and Serbia and Montenegro (SCG) to seal documents that are key evidence of the Serbian and Montenegrin aggression on Bosnia and Herzegovina (BiH) and genocide in BiH. The documents contain a statement given by Slobodan Milosevic, the former president of Yugoslavia, in which he boasts: “We control over 72 percent of territory in BiH”. This statement is completely relevant as evidence of Serbia’s involvement in orchestrating an aggression and genocide in BiH. No amount of resolutions will absolve it from those facts.

Calling the killing of 8372 men, women and children anything else but genocide is criminal in itself and is a further insult to the victims.  On 18 December 1992, the United Nations General Assembly resolution 47/121 in its preamble deemed ethnic cleansing to be a form of genocide. Furthermore, in 2001, the International Criminal Tribunal for the Former Yugoslavia (ICTY) judged that the 1995 Srebrenica massacre was genocide.  In the unanimous ruling “Prosecutor v. Krstić”, the Appeals Chamber of the International Criminal Tribunal for the former Yugoslavia (ICTY) in The Hague, reaffirmed that the Srebrenica massacre was genocide. On February 26, 2007 the International Court of Justice (ICJ), in the Bosnian Genocide Case concurred with the ICTY’s earlier finding that the Srebrenica massacre constituted genocide.  On January 15, 2009, the European Parliament has overwhelmingly adopted a resolution (by 556 to nine, with 22 abstentions) proclaiming the 11th of July a Day of Commemoration of the Srebrenica genocide throughout the European Union (EU). On 27 June 2005, during the 109th Congress, the United States House of Representatives passed a resolution (H. Res. 199) commemorating the 10th anniversary of the Srebrenica genocide. The Senate version, S.Res.134 was agreed to in the Senate on 22 June 2005 without amendment and with unanimous consent. States and cities in Michigan, Missouri, North Carolina, and Illinois have issued proclamations and adopted resolution that the genocide took place in Srebrenica and the rest of Bosnia and Herzegovina. Srebrenica Remembrance Day and Bosnia and Herzegovina Tribute Week motion M-416 was submitted this past fall into the Canada House of Commons procedure by the Honorable Brian Masse, Member of Parliament for Windsor West.

Serbia must face the truth and dark role it played in Bosnia and Herzegovina and other three wars in former Yugoslavia.  The only way to moving forward is to call the facts by its rightful name, genocide committed against Bosniaks in the name of Greater Serbia goals.