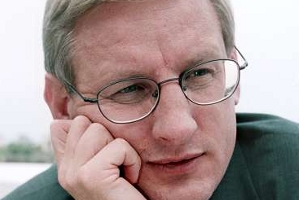 (Hajrudin Somun is the former ambassador of Bosnia and Herzegovina to Turkey and a lecturer of the history of diplomacy at Philip Noel-Baker International University in Sarajevo.)

If there is one foreign dignitary whom a majority of Bosnian citizens do not want to see in the new year, it must be Carl Bildt, the Swedish foreign minister, whose country holds rotating presidency of the European Union for a few more days.

He would be welcomed, of course, to come together with his wife, Anna Maria Corazza Bildt, to ski at Sarajevo’s Winter Olympics venues, but not in a political capacity. But even then, both would likely be asked unpleasant questions about their political dealings concerning Bosnia and Herzegovina.

Carl Bildt merits a different outlook from Turkey, for example. Sincerely or not, he tried until the last moment to unblock Turkey’s EU accession talks, stressing that it was “in the strategic interest of Europe” to do so. In Tel Aviv, he was called a “stupid man” due to his comparison of Israel with Hamas. He was not welcomed in Moscow during the war in South Ossetia because of his comparison of Russia with Hitler’s Nazi Germany. Regarding Bosnia and Herzegovina, however, he lays all blame for the country’s political impasse on Bosnian politicians, not making any distinction between those struggling to preserve its integrity and those threatening to further destabilize — or even divide — it.

People — whether as individuals, small social groups or whole nations — when unable to recognize their weakness and impotence to solve grave problems by themselves, place the blame on others. But in the Bosnian case in particular, the international community has the essential responsibility for the current Bosnian political stalemate. The international community stopped the war in Bosnia with the Dayton Peace Accords in 1995, but at the same time imposed a constitutional structure that, aside from rewarding aggressors, prevents the country from entering 2010 as a normal and functional state.

Bildt was part of that international community’s mechanism and, thus, shares its responsibility. He served as the co-chairman of the Dayton peace talks as well as the co-chairman of the recently failed US-EU attempt to ease the crisis in Bosnia. He has been involved in Bosnian and other Balkan problems, representing the UN or the EU but adding to his missions a personal, and very often controversial, touch.

I met the man only once, in İstanbul. It happened on a rainy winter day shortly after the Dayton Peace Accords were concluded when Bildt came to consult Turkish officials about its implementation. We were having dinner in a restaurant being splashing by the choppy waters of the Bosporus when a Turkish colleague whispered to me a question while pointing at Bildt. “On whose behalf did he come here?” We guessed it was more on the behalf of the Americans, or the Britons, or even the French — but these were all guesses. “You should know,” he whispered to me. “Western powers like to engage Scandinavians, particularly Swedes, to accomplish dirty diplomatic jobs for them.” He said the same was the case even in Ottoman times, citing the conclusion of treaties in 1813 and after the Balkan wars in 1913. I never again met with my interlocutor from that stormy Bosporus night to continue our talk, and I have yet to find a Swede who served as a mediator in the years he mentioned. I also did not have the opportunity to ask Turkish historians, such as İlber Ortaylı, about this, but they should know if indeed there was someone.

The role of Swedes

However, ever since, I have kept somewhere in the back of my mind the idea of “dirty diplomatic jobs” whenever there was talk of international mediation missions in the hands of Sweden or other Nordic countries. Modern history remembers some mediators and conciliators who, risking even their lives, exerted themselves to direct great crises and conflicts toward a peaceful settlement. Perhaps most prominent among those who gave their lives on that path in the last century were the Swedes.

One was Count Folke Bernadotte, the United Nations’ mediator for Palestine. After the failed UN effort to partition Palestine into an Arab and a Jewish state in November 1947 and at the beginning of the first of the wars in the Middle East, in May 1948, the UN General Assembly chose the former International Red Cross mediator to undertake the first serious UN attempt at peacekeeping after World War II. Seeking to stop the war between newly proclaimed Israel and the Arab states, Count Bernadotte proposed a new plan of partition, with Jerusalem ruled by Jordanians. Jewish extremists did not like it at all, and their terrorist group Lehi, led by future Israeli Prime Minister Yitzhak Shamir, assassinated the UN envoy when he was passing through the Jerusalem streets only four months after his arrival in the conflict area.

That assassination left no hopeful trace for future developments. Jerusalem is still one of the stumbling blocks in the Middle East crisis. From the other side, weakness displayed toward the Jewish state for its reluctance to prosecute the murderers of the UN mediator seriously damaged the image of the world organization at the very beginning of its existence.

Another one was Dag Hammarskjöld, a Swedish statesman and the second UN secretary-general. He was known as an international peacemaker of great moral authority and sensitivity. He was killed in a plane crash over today’s Zambia at the peak of the Congo crisis in 1961. It is believed that Hammarskjöld was assassinated as well. He initiated the sending of a UN peacemaking force to Zaire, now the Democratic Republic of the Congo, but Russia, then the Soviet Union, strongly opposed UN involvement. It was one of the largest tests of East-West rivalry, so Hammarskjöld could also be considered a victim of the Cold War. He was posthumously awarded the Nobel Peace Prize. “I realize now that in comparison to him, I am a small man,” US President John F. Kennedy said at the time.

At the crossroads of two centuries, Scandinavians were again engaged as international mediators: Swedes in Nagorno-Karabakh and Bosnia, Norwegians in the Oslo talks between Israelis and Palestinians and Finn Martti Ahtisaari, who acquired fame in Kosovo.

Swedes have also considerably contributed to studies and expertise in the fields of international mediation, conciliation and peacekeeping. There is the Swedish Forum for Mediation and Conflict Management, the Folke Bernadotte Academy and the department of peace and conflict research at Uppsala University.

A question was raised when Olof Palme served as prime minister over whether Sweden had taken on the role of a critic at the expense of that of a mediator. Palme was also assassinated. He was known as a harsh critic of everyone: the Americans because of Vietnam, the Russians because of Czechoslovakia, the Britons because of the apartheid in South Africa, the Israelis because of the Palestinians. Ulf Bjereld was right, proving in his study “Critic or Mediator? Sweden in World Politics, 1945-90” that his country’s taking on the role of a critic in the 1960s was not followed by a decrease in its mediation or bridge-building missions. He concluded, however, that “restrictions on criticism and attitudes come up in conflicts where that country is also acting as a mediator or bridge-builder.”

There was also an interesting recent study by Professor Isak Svensson from Uppsala University examining the effect of biased versus neutral mediation on the content of peace agreements, but I have yet to see its full text to see if he considers Bildt’s missions in the Balkans and Bosnia as biased or neutral.

Concerning Bosnia and Herzegovina, Bildt would deserve a secure place under the first category. That’s why a majority of its citizens would like to bid him a full-hearted adieu.

Everything aside, he cannot be forgiven for what he did immediately after the peace deal was signed in Dayton. He was appointed as the international community’s first representative in the country. He gave Serbs a full month, enabling them to dismantle factories and take them to Serbia as well as to abandon devastated territories Serb leader Radovan Karadzic ordered them to leave.

Bildt was not alone in appeasing Serbian President Slobodan Milosevic as a Balkan “capo.” He introduced the term “collective guilt” for whatever Serbia was doing in Bosnia and Croatia, where he was declared persona non grata, but he went further, saying in his memoirs, “I had no way of knowing who was responsible for what was happening around Srebrenica.” The words genocide in Srebrenica never passed his lips.

The families of Srebrenica victims were recently very outraged when they became aware that Bildt was implicated in the early release of Biljana Plavsic, who was among the Bosnian Serb leaders most responsible for the killings of more than 8,000 of their sons, husbands and relatives.

In the end, Bildt’s wife, a Swedish delegate in the European Parliament, gave all this a particular touch. She was the most vociferous opponent of a proposal that would grant citizens of Bosnia and Herzegovina the right to join those from other regional countries in being able to travel to EU member states visa-free.

Who knows what causes lie behind Bildt’s controversial behavior. Is it a more or less biased approach, as seen in his dealings in the Balkans and in Bosnian affairs, or an unrealistic desire to enroll himself among the most prominent Swedish and European statesmen? Or is there is a personal complex or even a simple human fear that he could lose his life, just as his great compatriots Hammarskjöld and Palme did? In any case, I have been unable to find an idea of Bildt’s worth remembering, but I know an appropriate one from Hammarskjöld’s diary: “He who wills adventure will experience it — according to the measure of his courage. He who wills sacrificed will be sacrificed — according to the measure of his purity of heart.”