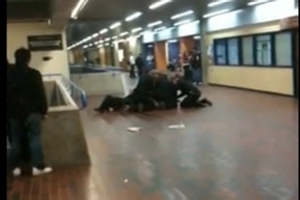 The Congress of North American Bosniaks, on behalf of 350,000 Bosniaks in the USA and Canada, strongly condemns brutality displayed by the Campus Police and Police from University of Western Ontario on Wednesday October 14, 2009, during the arrest of 22-year old Irnes Željković – University of Western Ontario fourth-year social sciences student, Bosnian Canadian citizen from Glamoč in Bosnia and Herzegovina.

It is absolutely unjustifiable that a campus student can in 90 seconds receive at least 18 punches in the back, 14 punches in the face, 7 baton hits across shoulder, 5 knee kicks in the back by 6 police officers… as a justification for alleged disorderly conduct.

To apprehend a suspect is one thing, but display of this level of brutality, excessive force and violence is criminal overstepping of boundaries. Especially with a student with no prior history of violence.

CNAB concurs with the former Campus Officer – Ryan Venables’s evaluation of this situation, who concludes: “We are trained specifically NOT to use this hard impact weapon on areas where significant damage could be caused (i.e. neck, forearms, and head) because of the risk to the suspect.”

What is even more disturbing is the response from University of Western Ontario officials who are justifying this excessive use of force against one of their own students. It’s a shameful response and shows a lack of compassion on the part of the University officials.

We demand immediate; firing of Elgin Austen – the head of campus police, reprimand and start of a criminal investigation against all police officers involved. We demand an apology to the family of Mr. Željković.

On behalf of the Congress of North American Bosniaks
Semir Djulic, Spokesperson for the CNAB