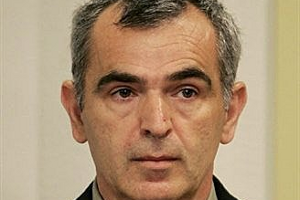 A former Bosnian Serb officer was found guilty of genocide on Friday. He was sentenced to 30 years in prison for his part in the killing of Bosniak civilians in the Srebrenica genocide in July 1995.

Milorad Trbic was found “guilty of genocide, for his participation in a joint criminal enterprise (…) which consisted of the common purpose and plan to capture, detain, summarily execute and bury all able-bodied Bosniak males from the Srebrenica enclave,” the court said in a statement. “Moreover, the Court found that the Accused perpetrated these acts with genocidal intent,” it added.

From 1992-95, Serbs constantly attacked Bosniak villages and towns around Srebrenica and burned alive scores of Bosniak women and children. Serbs never demilitarized around Srebrenica. In July 1995, Serb forces under the command of Gen. Ratko Mladic forcibly took control of Srebrenica and perpetrated genocide by expelling 30,000 Bosniaks and summarily executing more than 8,000 men and boys.

At the time, the 51-year-old former army captain served in the area with the Zvornik Brigade of the Bosnian Serb army. The court found him guilty of selecting sites where Bosnian Muslim males from Srebrenica were detained and executed en masse. Trbic was also involved in the exhumation and reburial of victims of the mass executions during which bodies were dismembered and body parts reburied in different mass graves.

“These actions have considerably lengthened the time needed to identify the bodies and has extended the suffering and grief of the victims’ families,” the court said.

The Srebrenica massacre, the worst atrocity in Europe since World War II, has been classified as an act of genocide by the International Court of Justice and the UN war crimes tribunal, both based in The Hague. Trbic was originally indicted by the International Criminal Tribunal for the former Yugoslavia (ICTY) but his case was transferred to the Court of Bosnia and Herzegovina in 2007.

Local Bosnian authorities are dealing with low-profile war crime cases, while the ICTY is tasked with hearing those involving top wartime officials. In July 2008 Bosnia’s war crimes court sentenced seven Serbs to up to 42 years in jail for committing genocide during the Srebrenica massacre.

The trial before the ICTY of the Srebrenica genocide’s mastermind, Bosnian Serb war-time leader Radovan Karadzic, is expected to start on October 26. Karadzic was arrested on a Belgrade bus in July 2008 after 13 years on the run, posing as a doctor of alternative medicine.

Bosnia’s war claimed at least 100,000 lives, while some 2.2 million people, more than half of the population, fled their homes.