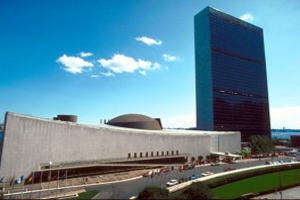 With 183 first round votes “for”, United Nations General Assembly on Thursday elected Bosnia and Herzegovina to one of five new non-permanent Security Council seats, with a mandate from 2010  to 2012, as stated by the Ministry of Foreign Affairs.

Bosnia and Herzegovina will represent a group of East European countries in the UN. By the end of this year, this group will be comprised 23 countries, led by Croatia.

Choice for non-permanent membership of the Security Council the UN is undoubtedly the greatest foreign policy achievement of Bosnia and Herzegovina since its independence in 1992.  This result is preceded by months of diplomatic activities coordinated with the primary aim for our country to be recognized as a reliable partner that can be entrusted to the Security Council membership in the UN.

During the campaign, every opportunity has been  has been taken advantage of on a bilateral and multilateral level to ask for support for candidature of Bosnia and Herzegovina, and thus has secured the written support of more than 100 countries.

“Non-permanent membership of BiH in the UN Security Council has invaluable significance, because BiH will in the course of two years to be among those countries that will decide all major issues of world politics,” said Minister of Foreign Affairs Sven Alkalaj who attended the vote.

Minister Alkalaj added that “our attitudes and our voices will be heard not only in the UN building in New York but also beyond. A successful mandate as a non-permanent Security Council member will strengthen the image, reputation and influence of BiH in the world and open a lot of political and economic doors that would otherwise be very difficult to open.”