To the editor of New York Times: 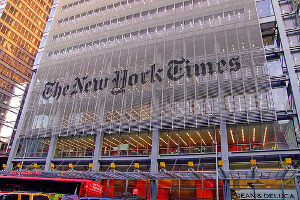 In a recent letter to the editor, on September 21, 2009, entitled “Bosnia at Peace,” Milorad Dodik – the Prime Minister of the Republika Srpska (RS), smaller of the two entities of Bosnia and Herzegovina – tried to portray himself as an agent of peace and an advocate for a democratic Bosnia and Herzegovina. This is only the latest attempt by the Serb nationalist to fool the international community into believing that he is not the problem in the latest political stalemate that has engulfed the country. However, those of us who are familiar with Mr. Dodik, know that he has been relentless in undermining the peace efforts, and the single biggest factor destabilizing Bosnia and Herzegovina and the entire region.

It should first be noted that Mr. Dodik is currently under criminal investigation by the Bosnian State and Investigation and Protection agency for embezzlement of public funds, and widespread fraud and abuse of power. Mr. Dodik is suspected of abusing his power by awarding contracts to a company owned by his friend and political ally Slobodan Stankovic.

Mr. Dodik is working against Bosnia’s integration into the EU by creating political roadblocks and resisting constitutional reforms which have clearly been stated as a requirement towards the path to Euro-Atlantic integration. He refuses to engage in constructive dialogue and often uses secessionist threats as a political tool. Most recently, Dodik and the government of Republika Srpska, openly challenged the decision of the Office of the High Representative regarding the power transmission company “Elektroprijenos”, and instructed the RS representatives to boycott the OHR decision and cease all activities with the public company. He makes threats of holding a referendum for independence whenever there is any attempt to make Bosnia and Herzegovina a more cohesive and viable state. He also refuses to recognize any court that is presided over by a Bosniak judge. These are only a few examples that showcase his work against a viable multiethnic and democratic state.

Mr. Dodik is also a major roadblock to peace and reconciliation among the Bosnian people by refusing to recognize the genocide and war atrocities that have been committed by the Bosnian Serbs during the war. He also continues to insult the victims by, not only refusing to recognize them, but also adds salt to the wounds by glorifying the efforts of the Bosnian Serb army. Most recently, Dodik openly denied a war crime that occurred in the Bosnian town of Tuzla, where 71 civillians, including women and children, were massacred. The Court has already convicted a Bosnian Serb general Novak Djukic to 25 years in prison for his role in the crime. Still, politicians like Dodik stand in the way of truth and justice that are critical components of any efforts for peace and reconcilement in the region. Dodik and his Party of Independent Social Democrats (SNSD) are also blocking legislation in the Bosnian parliament that would make holocaust and genocide denial a criminal act, a law already adopted by most European countries.

Furthermore, Dodik clearly sees the Office of the High Representative (OHR), as the obstacle to his nationalist and secessionist agenda. As the final lever in the Dayton system of checks and balances, the OHR is the only thing that is holding the country together. Mr. Dodik has taken advantage of years of neglect shown by the Bush administration and the European Union. Over the last few years, Dodik has systematically worked to undermine all centralized institutions of the Bosnian government and is now trying to put the final pieces in place to break apart the Bosnian state, thus finishing the heinous job that was started by the war criminals Slobodan Milosevic and Radovan Karadzic.

The international community has forced Bosnia to maintain a weak central government (via the Dayton Peace Accords) and allowed extremists to come to power and drown out the voice of the moderates. It is an unacceptable outcome for those of us who believe in peace, justice, and democracy. The Dayton agreement was intended to stop the war and preserve the sovereignty and independence of the Bosnian state. Instead, its loopholes have allowed for extremists like Dodik to abuse their power and work against the very system he claims to serve. If Dodik’s plan comes to fruition, it will mean that evil has prevailed against good, the lies have drowned out the truth, and that the policies of genocide and war crimes have been rewarded.

To quote the famous words of Dr. Martin Luther King Jr.: “Tragedy is not the brutality of evil, but the silence of good people”. One has to wonder how much longer Obama’s administration will remain silent and watch as Mr. Dodik single-handedly leads Bosnia to another wave of violence. This is the time for action and the moral duty to ensure that Bosnia and Herzegovina reaches its potential as a multiethnic, democratic, and a prosperous state that is fully integrated into the world community.

On behalf of Congress of North American Bosniaks

The Congress of North American Bosniaks is an umbrella organization representing approximately 350,000 American and Canadian Bosniaks.