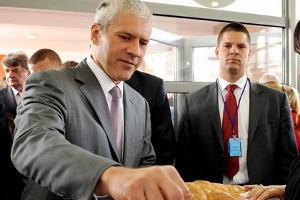 The Congress of North American Bosniaks, an umbrella organization representing 350,000 American and Canadian Bosniaks, strongly condemns the latest actions of Serbian president Boris Tadic during his unannounced visit to the Republika Srpska, a smaller of the two entities of Bosnia and Herzegovina. The visit was coordinated without the proper notification and knowledge of the government authorities, including the Ministry of Foreign Affairs of Bosnia and Herzegovina. To make matters worse, Mr. Tadic overstepped the boundaries during his visit by participating in opening of a public school in the Bosnian town of Pale that was insultingly named “Serbia” and for which the Serbian government donated a significant amount of money.

These disturbing actions are a direct challenge to the sovereignty and independence of Bosnia and Herzegovina, in what is a continued campaign of aggressive nationalist politics aimed at undermining BiH sovereignty and weakening the authority of the central Bosnian government. Rather than playing a constructive role in the region, Serbia continues along the same old path of supporting nationalist elements in the region at the expense of others. It is an ominous resurgence of politics that led to the violent breakup of Yugoslavia in 1991 and the war of Serbian aggression on Bosnia-Herzegovina in 1992. This is also a clear signal to the European Union and the International Community that Serbia is still not serious about promoting peace and tolerance in the region.

CNAB demands an immediate investigation into the constitutional legality of naming a public school “Serbia”, given the historical zealous role that Serbia played in the region and the thousands of lives that were lost as a result of that role. It is not the name itself which is the issue, but rather the utilization of a school opening for political purposes with the intention of promoting Bosnian Serb secessionist politics and Serbia’s encouragement of the same. Bosnian Serb politicians purposely ignore state institutions and symbols of Bosnian statehood (i.e. flag, anthem, national holidays). We request that the International Community take immediate action to address the growing secessionist actions by the Bosnian Serb politicians and the support they are receiving from members of the Serbian government, including Mr. Tadic, whose support and continued claims to Bosnia and Herzegovinian territory and people, are evident in the comments made at the event where he said that “his responsibility is not only to the citizens of Serbia but to all those who carry its name (Bosnian Serbs)”.

Furthermore, Serbia also refuses to accept responsibility for the aggression on Bosnia and Herzegovina, and are actually continuing the persecution of Bosniaks, in what can only be seen as the return to the same old politics aimed at creating an ethnically homogenous “Greater Serbia”. This has been very evident with recent arrest warrants and threats of arrests of prominent Bosniak leaders for their alleged role in actions against Serbian [Yugoslav] Army, during the war and aggression against Bosnia and Herzegovina backed by Serbia and Montenegro, issued by the Serbian government. Serbia illegally held a Bosnian citizen, Ilija Jurisic, on trumped up charges for defending his home town of Tuzla, against Serbian aggression.

Lastly, the investigation should also look into the circumstances surrounding Mr. Tadic’s visit and whether any laws were broken by the Republika Srpska authorities who coordinated the visit without the proper knowledge of the Ministry of Foreign Affairs.

On behalf of the CNAB Board of Directors