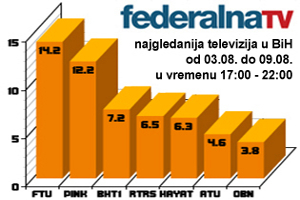 Report on an important debate, with unusually authoritative participants, on the nature of the 1992-95 genocide in B-H, and on the significance for current politics of the way in which it is understood and portrayed

In a special edition of the Posteno [Frankly] current affairs programme aired by Bosnian Federation broadcaster FTV on 11 July 2009, on the occasion of the 14th anniversary of the Srebrenica tragedy, host Duska Jurisic moderated a discussion in the studio with guests Emir Suljagic, a Srebrenica survivor, author and currently a PR advisor to the Sarajevo mayor; Hasan Nuhanovic, a Srebrenica survivor and author; Edina Becirevic, a professor at Sarajevo’s Faculty of Criminal Justice Studies; Janja Bec-Neumann, a Serbian-born sociologist living in Germany; and Florence Hartmann, a former ICTY spokesperson.

At the onset of the discussion, Suljagic criticized the ‘spin’ on Srebrenica in the local public that did not allow Srebrenica victims to be anything else but victims. He also expressed fear that ‘as time passes, remembering Srebrenica we have started forgetting Bosnia’, explaining that ‘the story of the genocide started as the story of genocide in Bosnia and ended as the story of the genocide in Srebrenica’. He added that by emphasizing only the Srebrenica tragedy the current political and religious establishment was doing a ‘disservice’ to the Bosnian people and preventing them from facing up to what had happened in the country.

Hartmann mentioned the possibility of Karadzic not being charged for crimes committed in Sarajevo or Srebrenica so that his trial before the ICTY would be shorter. She added that in this case the genocide charge would be dropped, although Karadzic had been indicted for genocide not only in Srebrenica region, but also in other regions of Bosnia in the period 1992-95. She also said that this page of history could not be turned before it had been fully read.

Asked about to what extent Srebrenica was discussed abroad, Bec-Neumann welcomed the Srebrenica resolution adopted by the European Parliament, saying that this showed that people cared and felt respect for the victims. She added, however, that the entire ex-Yugoslav region was little talked about abroad. Becirevic, on the other hand, described the European Parliament’s Srebrenica resolution as ‘the pinnacle of hypocrisy’ since ‘to continue allowing genocidal rhetoric and to continue playing with Bosnia-Hercegovina’s division in principle means to encourage perhaps a new, future genocide’. She said that these resolutions did not affect the situation on the ground at all.

Suljagic objected to the EP resolution because it, in his view, reduced everything that had happened during the Bosnian war to the five days of July 1995 in which Srebrenica was captured by the Serbs and many of its Muslim residents killed. He also said: ‘Speaking about the resolution affecting the situation [on the ground]: Europe’s main man for Bosnia-Hercegovina at the moment is Carl Bildt [the foreign minister of Sweden, which currently holds the EU presidency], who on 16 July 1995 sat in Dobanovici [a military base 30 km southwest of the Serbian capital Belgrade] with Ratko Mladic and Slobodan Milosevic while the last big group of Srebrenica prisoners were being executed in Kozluk [village in northeastern Bosnia]’.

Discussing Mladic’s possible arrest, Suljagic said that the greatest obstacle to that happening were the Serbian state security and military intelligence agencies, some of whose members are deeply embedded in Serbia’s political establishment and will protect Mladic ‘as long as possible’. He added that what Serbia was doing in not arresting Mladic was offensive and contrary to Europe’s fundamental values. Hartmann said that she had always believed Mladic would be the last one to be extradited since he was ‘a link in the original system that had designed and ordered the genocide in Bosnia’, while Karadzic was rather ‘a spokesman than a participant’. She, however, also observed that no one in Europe seemed to have a problem with suggestions that Karadzic’s trial should last for only one year, remarking that even her own [contempt of court] trial has lasted for one year. Bec-Neumann observed that the very fact that war crimes were tried at the Hague tribunal was progress, given that crimes committed in the region during World War II had been neither discussed nor tried.

Becirevic deplored the fact that ICTY trials and verdicts did not change much on the ground in Bosnia, quoting the example of Visegrad, where, according to her, most Bosnian Serbs were in total denial when it comes to genocide. To this, Hartmann said that the situation in Bosnia today was similar to a situation that would have been there if Germany had not been defeated and had been given Poland on top of everything. Becirevic suggested that the High Representative should impose a law banning genocide denial. Suljagic said that non-Serbs in the Bosnian Serb Republic were marginalized in political, economic, cultural and ‘every other respect’. He also noted that ‘revisionist rhetoric’ in the Bosnian Serb media around the time of the Srebrenica anniversary this year was ‘stronger than ever’. He further said: ‘No one can ask of me to sit at the same table and talk to people who deny what happened to me. No one can ask of me in the future to build a state with people who deny what happened.’

After a pre-filmed report on six former members of the UN Dutch battalion stationed in Srebrenica in July 1995 who have attended the Srebrenica commemorations in the last three years, the discussion in the studio concluded that the Dutch battalion were under no obligation to throw out the civilians who found refuge at the battalion’s camp at Potocari. Bec-Neumann said that in her view the Dutch battalion were accomplices in what happened. Speaking of genocide, she said that denial was its last phase and that confronting it took generations, as the case of Germany had shown.

Commenting on the statements by Bosnian Serb officials explaining why they would not attend the Srebrenica collective burial and commemoration, especially the statement by the Serb member of the state Presidency Radmanovic that he would not attend because it was a religious event, Suljagic said that there was no other way to bury the victims since they had been killed precisely because they were Muslim. He further said that statements such as those might lead to a new war. Bec-Neumann called the statements ‘shameful’ and said that they showed incompetence of the Bosnian Serb authorities in dealing with important issues. Becirevic saw the statements as a continuation of the ‘genocide rhetoric’ that had been dominant in the Bosnian Serb assembly in the period 1992-95. Hartmann said that the statements were ‘a continuation of war by other means’ and ‘unacceptable’ from the point of view of future generations, who should not be blamed for what their parents did.

Becirevic went on to quote the current Bosnian Serb PM, Milorad Dodik, as saying at a Bosnian Serb assembly session held in October 1995 that the Bosnian Serbs agreeing to a ceasefire in the winter of 1994 was ‘a disaster for the Serb Republic’. She also quoted Karadzic as saying at the same session, allegedly in connection with Srebrenica, that he had approved ‘both the immediate and the radical task’ and did not regret it. She said that, in her opinion, Dodik saying today that he did not trust Bosniak [Bosnian Muslim] judges on the state court had a bigger political weight that his October 1995 statement from the Bosnian Serb assembly and had to be subject to sanctions. Nuhanovic was more optimistic when it comes to the future of Bosnia-Hercegovina, noting the possibility that remembering Srebrenica might be just the element to save Bosnia from disintegration and produce ‘positive energy’ that could again bring the people together. He expressed hope that in the future Bosnian Serb schoolchildren, too, would be visiting the Srebrenica memorial like Bosniak children were doing now. Finally, he also found hope in the fact that Srebrenica was the most well-known place in the Serb Republic, adding that Bosnian Serb politicians in their future plans had to take into account that Srebrenica is located in their entity.

This report was produced by BBC Monitoring European, 20 July 2009. The source was Bosnia-Hercegovina Federation TV, Sarajevo, in Bosnian/Croatian/Serbian, 11 July 2009