Skip to Content
Home English Statement by Hon. Russ Carnahan Re: Anniversary of the Fall of Zepa 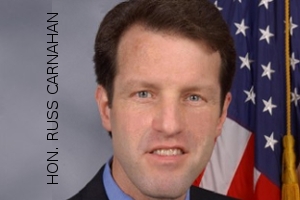 Mr. CARNAHAN. Madam Speaker, I rise today to recognize the anniversary of the fall of Zepa during the war in Bosnia in 1995. Just a few weeks ago, I attended the Srebrenica genocide remembrance ceremony in Bosnia and Herzegovina to commemorate the thousands of innocent lives lost during the war. It is important to remember these innocent people who lost their lives as Bosnians move forward.

This siege on Srebrenica, however, was not an isolated event. On July 25, 1995, Zepa, another U.N.-declared safe haven, also fell to the same forces that took Srebrenica just weeks earlier. The thousands of inhabitants and refugees in Zepa were forced to suffer, and die through a constant downpour of shellfire.

In addition to the vast numbers who perished due to the barrage of fire and starvation, an unknown number were taken away never to be seen again, including the Colonel of the Bosnia and Herzegovina army, Avdo Palic, who negotiated the evacuation of approximately 5,000 civilians.

Today, a little more than 14 years after the fall of Zepa, I urge us all to remember not only the fall of Zepa, but also the destruction of the other towns of Srebrenica, Zepa, Sarajevo, Gorazde, Bihac, Tuzla, Prijedor, Bjeljina, Visegrad, Foca, and Kozarac, and many others, all of which experienced significant loss. We must remind ourselves of the innocent lives that were lost, and honor their memory.

Madam Speaker, while we cannot erase the pain of these losses, let us support the efforts of the families of the missing to learn the fate of their loved ones, and let us support the justice that is necessary for the building of a stable, prosperous, and unified Bosnia and Herzegovina.