Skip to Content
Home English Report: Remembering the Day of the Srebrenica Genocide 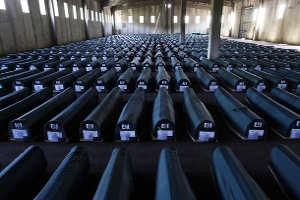 “One of the most important ways to remember the genocide in Srebrenica is to commemorate the atrocities every July 11th” – Mr. Samuel Harris, Holocaust survivor and president of Illinois Holocaust Museum and Education Center.

The program Day of Remembrance of Srebrenica Genocide is given in memory of, and with deep respect to, the more than 8,000 Bosnian Muslim (Bosniaks) men and boys, from 14 to 70 years old, who were killed by order of Bosnian Serb, General Ratko Mladic and the 25,000 women, children, and elderly who were deported from the city of Srebrenica. This was the most heinous war crime in Europe since the Second World War, and we wish to help create a thorough knowledge of what happened in Srebrenica, so it may be incorporated into our historical remembrance. In calling the public’s attention to the events of July 11, 1995 in Srebrenica, we can no longer passively accept that genocide is – in any way – humane! It is also a warning to future generations that this crime should never happen again to any group of people, anywhere or anytime. The possibility for greater understanding in Bosnia and Herzegovina and throughout the world depends upon our realization that truth and justice are the first steps towards reconciliation.

In the video presentation of testimonies of Srebrenica genocide survivors, Zuhra Osmanovic, stated, “On July 11th I tried to go into a truck with my kids. However, when I was trying to cross the dividing line that the Dutch soldiers posted, one Serbian soldier came to me and took my son from my hands. He asked me how old was he. Mirnes said that he was 15 but I said 13. I lied because I wanted them to let him go. I told him that he was wounded and the soldier asked who hurt him. I was afraid and I said that I didn’t know. I was fighting to hold on to my son but obviously the soldier was stronger than me and took Mirnes from my hands and took him on the left side of dividing line and after that somewhere, I don’t know where…… At that same moment the Chetniks put Memlo Osmanovic, Hasan Halic and Orhan to the left side of the tracks. They didn’t care how old they were. Memlo was around 25, my son was only 14, Orhan was 14, and Hassan 50. They took all generations of men. That’s why we can never forget the genocide that the Serbs did, especially in Srebrenica. …….And again I would like to repeat that we need to write, talk, and broadcast on the radio, TV, and newspapers the events in Srebrenica….. So that it is not repeated and does not happen again.” Zuhra Osmanovic sent her powerful message to the audience, and the world.

“And I still don’t know anything about my son. For Azem, my husband, they have already identified his bones. We had a funeral for him on July 11, 2006 . I had been hoping that he would come back but now I have no hope for him. …Now I’m living with my daughter in Chicago, Mersa. She’s married and has a beautiful child. My grandson’s name is Dino. In my Dino, my Sanja (interviewer), I see my Mirnes’ eyes. I look and look at Dino looking for Mirnes’ mouth, his eyes, his ears, but only his eyes are the same as Mirnes. I could cry and cry, but I still live in hope that I will find out news about my son whether he is alive or dead or if they can find his bones like other people from Srebrenica. And then he could rest in peace. There are many thousands and thousands of people from Srebrenica that are dead. He could rest in peace in the black soil.”

Zehra Spiodic, maiden name Omerovic, also a Srebrenica genocide survivor, said “I would never forget my father Sulejman Omerovic. He had a nice face, black hair and blue eyes. He was a peaceful man. Chetnics took him with them on July 11 1995 when he was trying to go into a truck with his family. I have never seen him again since then.

He was unarmed like all other men. United Nations Peace Keeping Troops and NATO took our weapons and the world promise to save us. It did not happened.10, 000 unarmed men were killed in Srebrenica “.

“Srebrenica in America”, the exhibition prepared by Ismet Ramic and Sanja Seferovic Drnovsek complimented these testimonies.( Chronology of Srebrenica Genocide, Information about Genocides that took place in 20 the century including Darfur today, Zuhra and Zehra Stories with pictures of their families, Samuel Harris and My Mom, Letters to Senators , Petitions)

A director of Holocaust Museum, our honored guest, Mr. Samuel Harris, talked about” The Power of Testimony”. I paraphrased a part of his speech notes.

“In 1905 George Santayana wrote :’those who cannot remember the past are doomed to repeat it.’

One of the most important ways to remember the genocide in Srebrenica is to commemorate the atrocities every July 11th .

The reason I am here today is because I was asked to share my memories in Emin’s school of gifted students at Taft Public School. The sharing of my memories in Emin’s class compelled him to write a magnificent article for the newspapers. We do not have to worry about our future because we have Emin, such a bright young man. His mom Sanja and aunt Selena, who prepared this program of Day of Remembrance of Genocide in Srebrenica, and I are doing the same things- spreading the word about Holocaust and genocide.

In Emin’s school I shared my memories as a child under Hitler in Poland to the students.

Emin remembers when we discussed the ghettos, the starvation, the beatings and the deaths. I told his class how the Jews were rounded up, beaten or shot if they did not move fast enough. That line of thousands would proceed to the cattle cars waiting at the train station.

I, at the age of about six was in that line. My father pushed me out and told me to run toward the pile of bricks nearby. My sister Sara was already there. Together we were hiding and watched the people march towards those cattle cars that carried them to the Treblinka gas chambers. That was the last time I saw my parents, 2 brothers, 2 sisters, many cousins and neighbors. ………

I wrote my book, Sammy, Child Survivor of the Holocaust, to share with the people what a bully like Hitler can do to human beings. He killed 6,000,000 Jews of which 1,500,000 were children. He killed many others as well. It was a Holocaust.

Two weeks ago, Paul Rusesabagina came to visit the Holocaust museum in Skokie. Paul was the manager of Hotel Rwanda. He saved 1,268 people. He visited for a long time as he saw the atrocities of the Holocaust. The newspaper wrote about us the next day: “ Born, nearly 20 years apart and in different parts of the world, they bonded when they met. They felt connected having experienced what no other human being should experience. This experience left each of them with the urgent need to proclaim now and forever and to all who would listen….NEVER AGAIN.’

Today I am in this room with beautiful Bosnian and Herzegovinian people who have also experienced genocide in their country. We must say to the world – NEVER AGAIN.

Bystanders must wake up and listen to the words of the German Pastor Martin Niemoeller quote:

‘First they came for communists

Because I was not a Communist.

Then they came for the Socialists

Because I was not a Socialist.

Then they came for the trade unionists

Because I was not a trade unionist.

Because I was not a Jew.

Then they came for me-

And there was no one left to speak out for me.

We must all speak out with our testimonies for they have the power to change or there will be no one left to speak out for us.’ “. With this powerful massage Samuel Harris finished his presentation.

Jonathan Moore, a deputy head of Mission, US Embassy in Sarajevo, was another respectful guest at the Bosnian American Library. The library was completely full of Bosnian and American people who gave respect to the victims of Srebrenica genocide. He spoke about the importance of his new job which he would start in August 2009 and invited everyone to visit him in the American Embassy in Sarajevo.

Muhammad Abdelrahman., a director of Darfur organization in Illinois, was again our guest speaker and he talked about a genocide that is taking place in Darfur, Sudan, today in front of our eyes.

“The most powerful and emotional moments were,”said Selena Seferovic, a director of Bosnian American Library, “many people told me today, when they heard Mensud Basic, vocal, and Lincolnwood Chamber Orchestra, conducted by Phil Simons (American Music Festival) and their music and words from the poem God is One Sheidi, Dzemaludin Latic, arr. Breton/Nuhanovic/Simmons Dzemaludin Latic, arr. LLya Levenson.”

They brought us very close to shehids, victims of Srebrenica Genocide. Many of us in the audience cried.

Phil Simon and American Music Festival, Lincolnwood Chamber Orchestra were partners with Bosnian American Library in our mission and organization for this event.

I wish you could hear their music while you are reading this poem! (English translation@2009 by Philip Simmons and Samir Hadzalic)

Shehids, you Loved Ones, where are you now?

Beside the fountain, lies knitted towel

And carafe, from which we were created.

Shehids, you Saints, where are you now?

In dust, the trace of naked feet.

Who prays now, on green carpets?

Hey, you Saints, where are you now?

Shehids, you of the Purest Scent, where are you now?

Near the villages, are your castles all over Bosnia!

Like the flowers in the garden, you are cheerful!

I am very proud to announce that each July 11th; Srebrenica genocide will be commemorated at the City of Chicago officially. At the City Council, on the 29th of July, the Aldermen Mary Ann Smith will present and sponsor the request of the citizens from Bosnian and Herzegovina who live in Chicago and who signed the petition on April 25 in the Bosnian American Library, which I initiated at the same event/Genocide Prevention .

We would remember Srebrenica Genocide forever!

Special thanks to Edin Seferovic who worked for the Aldermen and used his personal and professional influence on the city politicians and Haris Alibasic for sharing with me the language of Grand Rapids Resolution which passed this year in his city.

The Video presentation of two testimonies is produced by Sanja and Emin Seferovic Drnovsek and special thanks to Ferid Sefer for his help in editing.

Special thanks to Ismet Ramic for the cooperation on the exhibition , Samija Hardarevic Diab for wonderful Bosnian deserts, the Bosnian media that promoted this event: chicagoraja.net, bosniak.org, http://srebrenica-genocide.blogspot.com, bosnjaci.net, radio “Danas”, “Hajat” TV, bosnianlibrarychicago. com and to everyone who attended this important event.