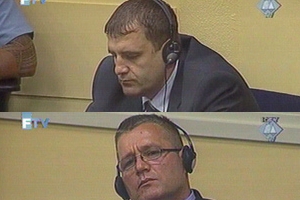 The International Criminal Tribunal for the Former Yugoslavia (ICTY) convicted two Bosnian Serbs – Milan Lukić and Sredoje Lukić – to life and 30 years’ imprisonment respectively, for crimes against humanity and war crimes committed in eastern Bosnian town of Višegrad during the 1992-1995 conflict.

The two cousins were charged with murder, torture and extermination of Bosniaks committed mostly during the early months of the war.

Milan Lukić has been found guilty of persecutions, murder, extermination, cruel treatment, and inhumane acts, as crimes against humanity and war crimes, in relation to six discrete incidents. He was convicted for the killing of five Bosniak civilian men at the Drina river on or about 7 June 1992 and the killing of seven Muslim civilian men at the Varda factory in Višegrad town on or about 10 June 1992. Milan Lukić was also found guilty of the murder of Hajra Korić. He was additionally found guilty of beating Bosniak detainees in the Uzamnica detention camp.

The murder of 59 Muslim women, children and elderly men in a house on Pionirska Street in Višegrad on 14 June 1992. The victims were locked into one room of the house which was then set on fire. Milan Lukić was found to have placed the explosive device into the room, which set the house ablaze. Milan Lukić shot at people trying to escape from the burning house.

He was also found guilty of the murder of at least 60 Bosniaks civilians in a house in the Bikavac settlement of Višegrad on 27 June 1992. The Trial Chamber found that Milan Lukić and other armed group forced the civilians inside the house, blocked all exits and threw in several explosive devices and petrol, setting the house on fire.

Sredoje Lukić was also found guilty of aiding and abetting the commission of the crime of persecutions inhumane acts, murder and cruel treatment. Specifically, he was found guilty of Uzamnica camp beatings and the Pionirska street fire, Judge Patrick Robinson dissenting with regards to the latter charge. He was found not guilty, Judge Pedro David dissenting, of charges pertaining to Bikavac house fire.

“The perpetration by Milan Lukić and Sredoje Lukić of crimes in this case is characterised by a callous and vicious disregard for human life,” Judge Robinson, presiding said.

“In the all too long, sad and wretched history of man’s inhumanity to man, the Pionirska street and Bikavac fires must rank high. At the close of the twentieth century, a century marked by war and bloodshed on a colossal scale, these horrific events stand out for the viciousness of the incendiary attack, for the obvious premeditation and calculation that defined it, for the sheer callousness and brutality of herding, trapping and locking the victims in the two houses, thereby rendering them helpless in the ensuing inferno, and for the degree of pain and suffering inflicted on the victims as they were burnt alive.”

Milan Lukić and Sredoje Lukić were initially indicted together with Mitar Vasiljević. He was arrested in January 2000 and sentenced to 15 years’ imprisonment by Appeals Chamber judgement rendered on 25 February 2004.

After seven years of evading justice Milan Lukić was arrested in Argentina in August 2005. His cousin Sredoje Lukić surrendered to the Bosnian Serb authorities the following month.

Since its establishment the Tribunal has indicted 161 persons for serious violations of humanitarian law committed on the territory of the former Yugoslavia between 1991 and 2001. Proceedings against 120 have been concluded.