Skip to Content
Home English CNAB Letter to the ICTY re: Key Evidence Against Serbia 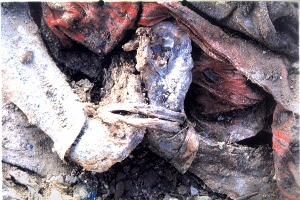 Last week hundreds of email addresses received two fax documents which contained signatures of judges Theodor Meron and Fausto Pocar of the Hague tribunal, dated September 20, 2005 and April 6, 2006. The documents are in regards to the decision of the International Criminal Tribunal for the former Yugoslavia (ICTY) which, if authentic, confirm the existence of an agreement between the International Court of Justice (ICJ) and Serbia and Montenegro (SCG) to seal documents that are key evidence of the Serbian and Montenegrin aggression on Bosnia and Herzegovina (BiH) and genocide in BiH.

The purpose of the secret agreement was clearly to hide the most relevant evidence which confirms the involvement of Serbia and Montenegro in organizing, planning and executing the aggression, war crimes, and genocide against the state of Bosnia and Herzegovina. Protective measures were authorized to Serbia and Montenegro in order to protect their national and state interests. The documents contain a statement given by Slobodan Milosevic, the former president of Yugoslavia, in which he boasts: “We control over 72 percent of territory in BiH”. This statement is completely relevant as evidence of Serbia’s involvement in orchestrating an aggression and genocide in BiH.

ICTY’s decision to seal and prevent release of this material evidence has directly caused harm to Bosnia and Herzegovina as it would have proven that Serbia and Montenegro were directly responsible for the agression and genocide in BiH. The absence of the stated documents resulted in a partial and incomplete judgment. This illustrates how the judges of ICTY have protected Serbian and Montenegrin documents without any legal basis.

After death of Slobodan Milosevic, Serbian and Montenegrin documents confirming the agression and geneocide in BiH are forever sealed. ICTY has also guarded its decision by marking the documents confidential which means that its release could bring about rigorous legal sanctions. Even though these documents have already emerged in the public domain on almost a thousand email addresses, rather than utilizing the opportunity to make an effort to find out the truth about Serbia and Montenegro’s crimes of aggression and genocide in BiH, the political, legal, and other experts both inside and outside of Bosnia and Herzegovina remain silent and thus endanger the process of finding out the truth and obtaining justice, which are the basic needs for final reconciliation and progress in BiH.

ICTY must finally respond to questions surrounding their decision and to requests for unsealing and removing protective measures regarding the documents. In the name of all victims of agression and genocide committed against Bosnia and Herzegovina, who consequently now reside in North America, the Congress of North American Bosniaks (CNAB) requests of ICTY to address the authenticity of these documents. CNAB requests of the Presidency of Bosnia and Herzegovina, the Council of Ministers, and the Parliamentary Assembly to request and seek answers regarding the question of authenticity of the stated documents.