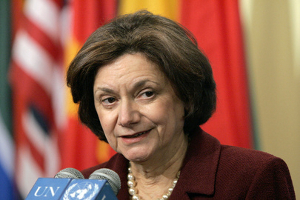 Remarks by US Ambassador Rosemary DiCarlo, on the situation in Bosnia and Herzegovina , in the Security Council Chamber, on May 28, 2009.

The United States is a friend of Bosnia-Herzegovina and supports the aspirations of the Bosnian people to enter Euro-Atlantic institutions. Our support was demonstrated by the joint visit of Vice-President Biden and the European Union High Representative Solana this month. Vice President Biden expressed our commitment to assist the Bosnian people achieve their dream when he addressed the Parliament of Bosnia and Herzegovina on May 19. He also expressed our strong support for the Office of the High Representative. We reiterate these pledges today.

A good deal of progress has been made in Bosnia-Herzegovina since the conflicts of the 1990s. But we do remain deeply concerned about the situation there today. As the High Representative’s report makes clear, some leaders and political parties still pursue narrow, ethnic interests and still espouse zero-sum nationalism. By doing so, they continue to impede progress on urgently needed reforms that would help all of the country’s citizens.

Regrettably, we also continue to hear divisive rhetoric. Those who purvey it seek to challenge the High Representative’s authorities, which have been affirmed by this Council, and even to threaten Bosnia-Herzegovina’s sovereignty and territorial integrity enshrined in the Dayton Peace Accords. And we still witness efforts to undermine the very state institutions that must be strengthened if Bosnia-Herzegovina is to meet the challenges of modern statehood and advance toward membership in NATO and the European Union. Let me cite one particularly egregious example: the May 14 conclusions of the Republika Srpska’s [SERP-ska’s] National Assembly, which falsely asserted that many of the authorities of the state of Bosnia and Herzegovina—including those explicitly granted by the Dayton constitution—were somehow illegally obtained.

Ambassador Inzko’s report rightly highlights a bright spot that has been seen since our last meeting: the enactment in March of the first amendment to the Dayton Constitution, to protect the multi-ethnic nature of the Brcko [BURCH-ko] District. The efforts that led to this amendment, growing out of the Prud process, offer some cause for optimism about moving ahead with additional reforms. We hope that this initiative will translate as quickly as possible into actions that meet the outstanding five-plus-two requirements set by the Peace Implementation Council.

Mr. President, the United States remains fully committed to peace and stability in Bosnia and Herzegovina , based on Dayton . We are also entirely committed to supporting reforms that will allow that country to achieve its aspirations for greater integration into the structures of Europe and the Atlantic alliance. We urge all Bosnian leaders to abandon the divisive nationalist politics that have brought such suffering and sorrow in the recent past. And we urge them to work across ethnic lines toward the reforms required to advance the goals that the people of Bosnia-Herzegovina share.