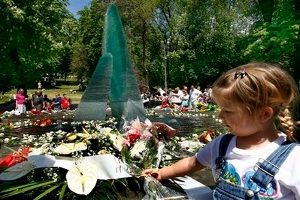 Thousands of people on Saturday gathered in Sarajevo for an emotional ceremony to unveil a monument commemorating the children killed during Bosnia’s 1992-95 war.

The monument — a tall glass structure surrounded by a brass ring made of melted mortar shell casings — was inaugurated at a ceremony in the city’s central park. The brass ring also features the footprints of siblings of the estimated 1,500 children who died.

Hundreds of children sang a song entitled “Let there be no war” at the ceremony and sirens sounded across Sarajevo at noon to mark the start of a minute’s silence.

Azemina Zeljkovic’s 12-year-old daughter Nirvana, who was killed by a mortar in August 1995 while playing with friends in her street, was one of the last children to die in Sarajevo during the war.

“She was a dancer, she wrote a diary… I hope this monument will make others remember and fight to prevent killing of children anywhere in the world,” she told AFP in tears.

“I am glad that the city remembered to honour our innocent children, but nothing can comfort me, nothing can bring back my son,” another woman, Emira Dzidic, told AFP during the ceremony.

Her teenage son Admir and his girlfriend Selma were killed by a mortar in December 1993 while walking home.

The siege of Sarajevo — the longest such blockade in post-World War II Europe — began in April 1992 and lasted until November 1995, and marked one of the darkest chapters of the Bosnian war.

Bosnian Serb troops shelled the city and used snipers against civilians, spreading terror among Sarajevans as they queued for bread, went to market or were simply walking with their children.

Some 12,000 civilians including the 1,500 children were killed during the siege.

The war in Bosnia erupted after the break-up of Yugoslavia when Croats, Serbs and Bosniaks fought for control of territory.

The three-and-a-half year war claimed some 100,000 lives while another 2.2 million people, about half the country’s population, were forced to flee.