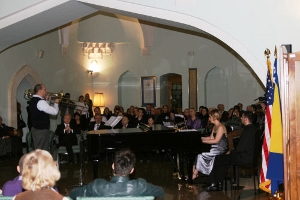 The Office of Public Affairs, in cooperation with the Bosniak Institute, the Performing Arts Academy, and the International Theater Festival MESS, organized a small American Cultural Festival that took place in Sarajevo March 26-28, 2009. This Festival showcased American culture through performing arts, movies, music, and photographic art.

Over the course of three days, festival participants had opportunity to attend a classical musical performance, see a unique art exhibition by American diplomats in BiH, attend screenings of American movies, and observe a special performance of excerpts from Broadway musicals, conducted by the students of the Performing Arts Academy.

The opening of the Festival was on March 26 at the Bosniak Institute and included classical musical performance by Vice Consul Roger Webb and BiH/American pianist Zamira Maslesa, followed by a special photo exhibit, “America Through Our Eyes,” of the American landscape taken by U.S. diplomats in BiH.

The exhibit is a unique opportunity for U.S. diplomats to share their culture with BiH. As the part of the Festival, four American movies were shown on Friday March 27: Akeelah and the Bee, Little Miss Sunshine, La Bamba, and We are Marshall. This is part of the Embassy Outreach Program and was open to elementary, high school and University students where they had a chance to learn more about the U.S. society, culture, and its values.

A U.S. Cultural Envoy, Ms. Edie Cowan of New York, conducted workshops and master classes on Broadway for 15 days. These classes were attended by university students, young professional actors, and directors. The end result was the public presentation by the students of the academy. This was the Festival finale on Saturday March 28.

The main objective of this workshop was to acquaint young professionals and students with new knowledge and techniques about American musical theater and to help broaden mutual understanding between young people in BiH and the U.S.