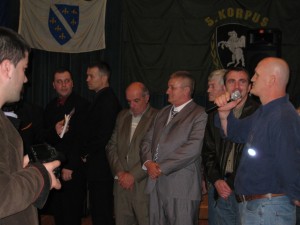 On Friday, April 10th in Astoria, New York City, NY, Bosniaks from Montenegro, under supervision of local Bosnian American Coordination of Congress of North American Bosniaks and under watchful eye of several Bosnian American media groups, undertook the organization of the event which marked yet 17th anniversary of very significant segment in the novel history of Bosnia & Herzegovina – Army of Republic Bosnia &Herzegovina, the sole defenders of Bosnian civilians and the backbone of the modern State Defense Forces of Bosnia-Herzegovina.

The key moment of the entire evening – beside lovely Bosnian folk dances (which fyi can be regularly seen at KUD “Sedef”, KUD “San o Bosni” in Astorija, NY and in BATO Delran, NJ) performed by the Bosnian American youth and their elders from Bosnia & Herzegovina and Sanjak; and most delicious Bosnian foods – was lining up of the surviving Bosnian war veterans a.k.a. “gazija” in Bosnian. This gathering has once again shown how much Army of Bosnia & Herzegovina truly rose from among the conscious resistance to the unlawful rebellion of disloyal Bosnian Serb, genocide they committed against non-Serbs and external elements of alien occupation.

Freedom, liberty and prosperity-loving Bosnian Americans honored guest from Bosnia & Herzegovina, whose free spirit – inherited from their ancestors who fought fascists, Nazis and supporters of Holocaust only 60 years ago – defended Republic Bosnia & Herzegovina so admirably against all odds. 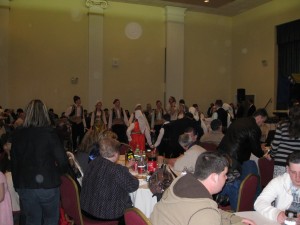 Yet veteran’s line up only demonstrated how much these seasoned, tough, unpolished, often disrespected yet feared warriors of Balkans favor peace and dialogue far above war, militant or militaristic attitudes and war mongering, Bosnian defense war veterans don’t like to be named or called up: in their view they’ve only done their duty to their country and people. This is why all the Empires that ruled Balkans kept a healthy dose of respect for the courage and competence of Bosnian knights – from Medieval till more modern times. During WWII anti-fascist resistance of Bosnia & Herzegovina kept busy 7 German divisions from redeploying elsewhere and still survived, thus helping Allies to complete successful landing in Normandy and on Sicily and defeat the Nazis.

And during latest genocide, these courageous men and women, these loyal citizens and devoted fathers, mothers, sisters and brothers rose up – with next to no weapons, armed only with their wit and genetic competence – to defend that what was proclaimed un-defendable by mssrs. Vance-Owen, Carrington, Bhoutros Ghali and half a dozen of European military experts. But in words of esteemed Mr. Diego Arria, “Bosnia didn’t roll over and die.” Thanks to these good citizens who stood up to defend Bosnian freedom of speech, freedom of religion, freedom of movement, rule of law, equality of all before the law, right to prosperity for all smart, hard working, enterprenuering individuals of Bosnia & Herzegovina.

ARB&H ALWAYS KEPT IN LINE – DESPITE CHALENGES OF ANNIHILATION

It is always important to emphasize one more thing when we speak about ARB&H. Despite natural human inclination to retaliate and clear provocations in the form of ethnic annihilation of Bosniak and other non-Serb populations Prijedor, Bijeljina, Brčko, Doboj, Višegrad, Foča, Rogatica, Trebinje, Gacko, Nevesinje, Vitez, Stolac, Livno, Čapljina, Mostar, Cazin, Žepa, Goražde, Srebrenica and ultimately Sarajevo – defensive forces of Bosnia & Herzegovina gathered around Army of RB&H HAD NEVER systematically, with premeditation and in organized fashion attacked other ethnic groups within Bosnian nation and people. There is not a single shred of forensic, military or historic evidence to support crazy, islamophobic, racist claims which self-proclaimed experts with hidden anti-Bosnian (and more than a few with anti-American) agendas disseminate unquestioned and unchallenged on the Internet. 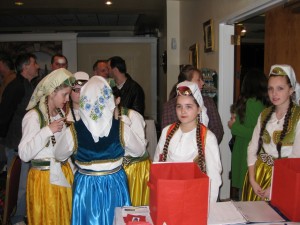 Even little birds know that ARB&H had no time, means and logistics (unlike some other military groups that roamed Bosnia & Herzegovina) to conduct extensive attacks (like the ones around Srebrenica alleged against former ARB&H commander Naser Oric) or even to punish occasional individual revenge of former victims on identified aggressor(s) militants and terrorists (see allegations against former ARB&H Chief of Staff Rasim Delic). ARB&H was too busy shaping itself into regular European army and defending Bosnian civilians. No persecution on the part of ARB&H caused migration of Bosnian citizens out of areas under its control.

Fact that a considerable number of Bosnians did leave “safe areas”, cities under siege and the country can be far easily, more appropriately and clearly explained by other factors: cruel and quick economic decline of Bosnian standard in the times of war (triggered by Yugoslav crisis in 1990 and Serbo-Croatian conflict in 1991); fear for the physical safety of their families (in the light of news on mass slaughters of all pro-Bosnian citizens, from incessant shelling and air-bombing of residential areas of B&H), understandably divided loyalty (due to family ties with Serbia and Montenegro, pacifistic convistions or political confusion) or unpardonable disinterest for the future of B&H (due to pro-Milosevic and pro-Karadzic political views, belonging to some non-Bosnian ethnic group or migration habits of the particular segment of community).

Although Bosniaks of Islamic religious background from Bosnia-Herzegovina have been and remained en masse the backbone of the defense and protection of Bosnia-Herzegovina on all levels, due mentioning of Bosniaks of Roman Catholic, Easter Orthodox and other faiths, as well as former Serbian, Croatian and other loyal citizens and resident who joined to the Army of RB&H and laid their lives for the just cause is in place, since from this vitally important amorphous mass of people grew, was trained, baptized in fire and shaped into institution – Army of Bosnia & Herzegovina. Today this segment is the key and the most reliable element of the modern Defense Forces of the State of Bosnia & Herzegovina.

US AND BOSNIA & HERZEGOVINA – THE ONLY NATURAL MILITARY ALLIES ON BALKANS

Just as US has among its leading politicians and legislators certain number of former war heroes with integrity and unwavering loyalty to US – like esteemed John McCain and John Kerry – so do the Bosnians. H.e. Ivo Komsic is a decorated war hero (“Golden Lily”) from a first line of Bosnia’s multiethnic defense; H.e. Haris Silajdzic is a seasoned modern Bosnian politician whose moderate attitude was shaped during most trying period of modern Bosnian history – attempts to annihilate Bosniak nation through genocide and defensive war against unequal aggression and treatures rebellion- yet who was mature and self-assured enough, just like his later President Alija Izetbegovic to accept Dayton Agreement for the sake of his people’s peace, if not for the sake of higher justice and now demand fulfillment of given promises of the past. 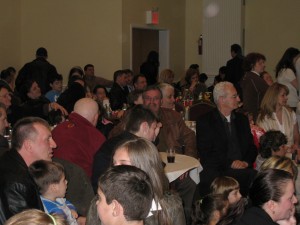 For in the past 17 years Dayton Agreement failed Bosnian citizens miserably. It failed: to enforce rule of law; to enhance the status of ALL Bosnian citizens equally instead of preferred ethnic group; to give chance for liberty and prosperity of Bosnians; to enable self-sustainable return for Bosnian and Bosniak returnees to the lesser Bosnian entity devastated by aggression; to establish affordable, economical and more functional government system in Bosnia & Herzegovina; to jump start and enable legislative procedures which will gear Bosnia & Herzegovina towards Euro-Atlantic path – to which B&H rightfully belongs now as it did in 1990s; Congress of North American Bosniaks hopes that U.S. unwavering support for justice, rule of law, won’t prevent similar steady and benevolent political presence of U.S. in B&H despite these severely trying economic times for United States. Just like in 1995 when highly qualified, well equipped and competent NATO military presence under stern and decisive US leadership had put a stop to genocide and lent steady hand of support to the people’s defense forces – Army of Republic Bosnia & Herzegovina.

It is up to us all – Bosnian citizens, Bosnian immigrants and Bosnian American community – to respect these traditions for this army stood for multi-cultural society, freedom of speech, freedom of religion and free markets.

It is also up to us, Congress of North American Bosniaks to defend and protect good name of Bosnia&Herzegovina, Bosnianhood, Bosniak nation and faith of Islam year after year; to respect and honor their traditions, teachings and tolerance and pass the same to the next generation of Bosniaks both in diaspora and in our old country.