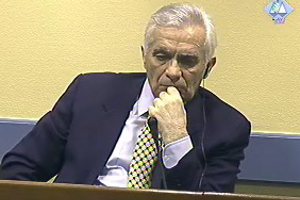 The Appeals Chamber today sentenced Momčilo Krajišnik to 20 years’ imprisonment, upholding earlier guilty findings against the former member of the Bosnian Serb leadership for deportations, forcible transfer and persecution of non-Serb civilians committed during the conflict in Bosnia and Herzegovina.

The Trial Chamber’s earlier convictions of murder, extermination and persecution – with exception of deportation and forcible transfer – were quashed by the Appeal Chamber judgement.

On 27 September 2006, the Trial Chamber found Krajišnik guilty of persecution, extermination, murder, deportation and forced transfer of non-Serb civilians during the 1992-95 conflict. He was found not guilty of charges of genocide and complicity of genocide. Krajišnik was sentenced to 27 years’ imprisonment.

The Trial Chamber found that Krajišnik participated in a joint criminal enterprise whose objective was to ethnically recompose the territories under the control of the Bosnian-Serb Republic by drastically reducing the proportion of non-Serbs through the commission of various crimes. “It held that there was a leadership component of the JCE, based in the Bosnian-Serb capital of Pale, which included Krajišnik, Radovan Karadžić and other Bosnian-Serb leaders; the local component of this JCE was based in the municipalities of the Bosnian-Serb Republic and maintained close links with the Pale-based leadership.”

Appeals were filed by the Prosecution, the Accused – including supplementary legal challenges made by Alan and Nathan Dershowitz, Counsel on the matter of joint criminal enterprise and Amicus Curiae.

The Appeals Chamber dismissed the Accused’s and Amicus Curiae’s submissions that the Trial Chamber violated Krajišnik’s right to a fair trial.

However, parts of Amicus Curiae’s third, fourth and seventh grounds of appeal were granted. The Appeals Chamber accepted that the Trial Chamber failed in part to specify which of the local politicians, militaries, police commanders and paramilitary leaders were members of the joint criminal enterprise. Thus, it could not beyond reasonable doubt conclude that a common objective between them and Krajišnik existed.

The Appeals Chamber reaffirmed the Trial Chamber’s finding that “Krajišnik shared the intent to commit the original crimes of deportation, forcible transfer and persecution based on these crimes from the beginning of the JCE”. However, with respect to the expanded crimes of murder, extermination and persecution (other than that based on deportation and forcible transfer) the Appeals Chamber found that the Trial Chamber failed to identify when those acts became part of the common goal of the joint criminal enterprise.

“The Appeals Chamber notes, however, that the Trial Chamber made only scarce findings, if at all, on these requirements,” the judgement reads. “Neither the Appeals Chamber nor an accused can be required to engage in speculation on the meaning of the Trial Chamber’s findings – or lack thereof – in relation to such a central element of Krajišnik’s individual criminal responsibility as the scope of the common objective of the JCE.”

It therefore quashed Krajišnik’s convictions for expanded crimes of murder, extermination and persecution with the exception of the underlying acts of deportation and forcible transfer.

The Appeals Chamber also found that on many occasions the Trial Chamber failed to find the link between the perpetrators of the original crimes of deportation, forcible transfer and persecution based on these crimes, and the members of the joint criminal enterprise.

Submissions by the Prosecution and the remainder of the Accused’s and Amicus Curiae’s submissions were all dismissed, the tenth ground submitted by Amicus Curiae on cumulative convictions by majority, Judge Güney dissenting.

While the Appeals Chamber noted that the majority of convictions of Momčilo Krajišnik were overturned it held that the gravity of the crimes of persecution, deportation and forcible transfer “requires a severe and proportionate sentence”.

Krajišnik was indicted on 25 February 2000. He was arrested and transferred to the Tribunal on 3 April 2000. Credit will be given for the time already spent in detention since Krajišnik’s arrest.

Since its inception 15 years ago the Tribunal has indicted 161 persons for war crimes committed on the territory of the former Yugoslavia. The proceedings against 117 individuals have been completed. With proceedings ongoing against 42 accused only two indictees remain on the run awaiting arrest – Ratko Mladić and Goran Hadžić.