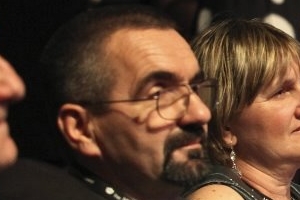 Milenko Krstic (52), the father of Miss Oregon, was a member of a Bosnian Serb army’s Zvornik brigade that participated in the mass killings of 8,000 to 10,000 unarmed Bosniaks, including a forcible transfer at least 25,000 people during the 1995 Srebrenica genocide.

In 1998 Krstic and his family emigrated to the United States. As part of a refugee application, he filled out an I-590 form, which requires, among other things, applicants to disclose foreign military service. He denied having served in the military “during a sworn, personal interview administered in Belgrade.”

In 1999, he applied to become lawful permanent residents. As part of the application, Krstic filled out an I-485 form, which also asks applicants to report any prior foreign military service. Krstic again refused to disclose his service in the genocidal army. As a result, he fraudulently obtained a green card.

According to The Oregonian, in 2005 the International Criminal Tribunal for the former Yugoslavia reported to U.S. immigration authorities that Krstic had, in fact, served in the Army of Republika Srpska. The alert prompted federal U.S. agents to visit Krstic’s home near Beaverton and interview him. Krstic admitted to actively serving in the genocidal army, but he denied committing any war crimes. If convicted, he could face up to 10 years in jail and be deported to Bosnia.

Krstic’s militia, also known as the Bosnian Serb Army, has been designated by the International Court of Justice in The Hague as having participated in war crimes, genocide and ethnic cleansing during the Bosnian war in the early 1990s.

Federal court files show that the U.S. government also learned Krstic’s specific unit, the Zvornik Infantry Brigade, was “involved in the massacre of a large number of unarmed Muslim prisoners in 1995, in areas in close proximity to (Krstic’s) duty station.”

A prosecution document said that one mass killing was at a school “in close physical proximity to battalion headquarters where records show that defendant was working at the time.”