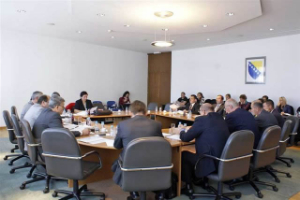 Congress of North American Bosniaks (CNAB), an umbrella organization of Bosnian-Americans and Canadians, victims of aggression and genocide, is of the opinion that the suggestion to change the Annex 4 of the Dayton Peace Accord in order to “resolve the Brčko issue” would in fact equal a rejection of the International Justice Court judgment of February 26, 2007 in which the pseudo-state Republika Srpska (RS) is labeled as an entity formed based on genocide, because its military formations and police force committed genocide in Srebrenica – one of the many reasons to recognize RS for what it is: an illegal entity. Even the slightest change to the Annex 4 would give RS legitimacy, which in turn would make the expected court ruling in case of Radovan Karadžić worthless and paradoxical; a man who as a leader and founder of RS is accused of genocide that he instigated, planned and implemented in 11 counties in Bosnia and Herzegovina (BiH). It is known that this genocide was work of more than one man: it was a team endeavor of the pseudo-state and illegal structures of RS and the former Yugoslavian state, as well as other proxies.

CNAB emphasizes that voting on Brčko is an effort to legalize RS – an effort to cement the existence of RS as a state within the Bosnian borders, taking up half of the territory as a prelude to the instigation of the fight between Bosniaks and Croats in order to split up Federation BiH. If this happened the judgments of the International Justice Court regarding many war criminals including Radovan Karadžić would become meaningless, because the mere suggestion to vote on the status of Brčko through the Dayton established BiH Assembly would implicitly legitimize RS, Karadžić’s life’s work. What is even more tragic is that the votes of Bosnian political parties would contribute to this illegal act.

CNAB reminds you that North American Bosniaks as citizens of Bosnia and Herzegovina and as victims of multiple aggressions against BiH and of the worst crime – genocide, have the right to state their opinion and to have their voices counted when it comes to such an important decision regarding the most important legal document and the future of their country. In the name of the victims of aggression and genocide, CNAB demands from the Bosnian political parties and Bosnian representatives in the Dayton created Assembly to reject discussing Brčko amendments on their own and to advocate for a development of a totally new Constitution with help of the international community. Otherwise, CNAB warns that the acceptance of the Brčko amendments by themselves would represent the final step in the legalization of the genocidal creation RS, with a right to self-determination and secession from BiH. CNAB rejects such an action as a step to dissolution of BiH, the only motherland of the Bosnian people.

In the name of the victims of aggression and genocide, CNAB warns Bosnian political parties, Bosnian representatives in the BiH Assembly and all other relevant entities that no one has the right to destroy coherence of the Bosnian state and society. Those who do this are committing a crime of historic proportions against BiH and Bosnians, thus creating European Palestinians.