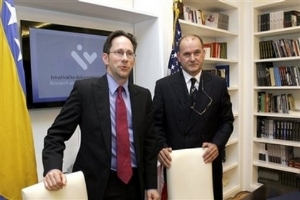 THE MYTH OF BRATUNAC: A BLATANT NUMBERS GAME

The allegations that Serb casualties in Bratunac, between April 1992 and December 1995 amount to over three thousand is an evident falsification of facts. The RDC (Research and Documentation Center) research of the actual number of Serb victims in Bratunac has been the most extensive carried out in Bosnia and Herzegovina and proves that the overall number of victims is three to nine times smaller than indicated by Serbia and Montenegro.

Perhaps the clearest illustration of gross exaggeration is that of Kravica, a Serb village near Bratunac attacked by the Bosnian Army on the morning of Orthodox Christmas, January 7, 1993 . The allegations that the attack resulted in hundreds of civilian victims have been shown to be false. Insight into the original documentation of the Army of Republika Srpska (VRS) clearly shows that in fact military victims highly outnumber the civilian ones. The document entitled “Warpath of the Bratunac brigade”, puts the military victims at 35 killed and 36 wounded; the number of civilian victims of the attack is eleven.

In addition to information received from relatives and family members of the victims and inspection of cemeteries, RDC has collected all existing primary sources, official documents and documentation of RS Ministry of Defense and Bratunac brigade of VRS, as well as research by the Serb authors. The victims have been categorized on the basis of two time-related criteria: the first was the municipality of residence at the time of the beginning of war; the second was the municipality of premature and violent death.

After all the sources have been processed, cross-referenced and reviewed, the results showed that 119 civilians and 424 soldiers classified in the first group died in Batunac during the war. Under the second category the number of civilians is somewhat higher (119) whereas the number of soldiers is 448. The result demonstrates that 26 members of other VRS units other than Bratunac brigade of VRS fought and died in combat in the municipality of Bratunac .

The number of victims from Central Bosnia buried in Bratunac is consistent with the population movements after the war, especially the Serb population from the suburbs of Sarajevo . Under the Dayton Peace Accords, the suburbs of Sarajevo held by the VRS were to be re-integrated into the city of Sarajevo . The then leadership of the RS called on the local Serb population to leave Sarajevo and even take the graves of their loved ones with them. In fact, such a large majority followed the instructions that parts of the city of Sarajevo remained deserted for months. The remnants of their loved ones have been buried in Bratunac after the war, but their deaths are presented as the result of actions taken by the Bosnian Army units from Srebrenica.

As importantly, a number of foreign nationals (mainly from Serbia and Montenegro and Croatia) are included in the overall figure of Serb victims in Bratunac. At least 15 such individuals lost their lives in Bratunac as a result of fighting; it may be of some significance that all of them were members of a paramilitary group that arrived to Bratunac in April 1992, upon invitation of Bratunac Serb Democratic Party and in coordination with the State Security Service of Republic of Serbia (see testimony of Miroslav Deronjić, President of Municipal Board of SDS Bratunac, at International Criminal Tribunal for the former Yugoslavia). Some of those individuals are Vesna Krdzalić, Dragica Mastikosa, Aleksandar Grahovac and Sreto Suzić who all died in combat on May 29, 1992 . Subsequently, they were all classified as “victims of Muslim terror” by the RS authorities. However, individuals from Serbia continued arriving to Bratunac throughout the year 1992, if the death records of the Bratunac brigade are to be trusted: one such individual died in fighting in August (Zarko Komnenski) and one more in November (Đuro Vujaklija). Furthermore, death records show that “volunteers” arrived from Serbia to Bratunac even in 1993, such as Dragan Milićev, who died in combat in January 1993 and Dragoslav Stanković who died in February 1993.

RDC: “The Myth of Bratunac: A Blatant Numbers Game”
http://www.idc.org.ba/project/the_myth_of_bratunac.html