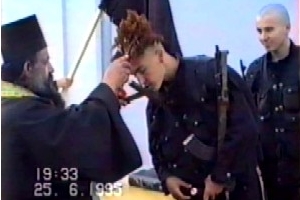 The Congress of North American Bosniaks condemns the Serbian Supreme Court’s ruling to uphold the appeals of two members of the Scorpions, Serbian terrorist formation that operated as a Serbian Police unit, and which committed war crimes in Bosnia in the period of 1992 -1995.

The defendant Branislav Medic’s sentence was reduced from 20 to 15 years, while a retrial was ordered in the case of Aleksandar Medic, who was originally sentenced to five years in prison. Scorpions’ members have committed war crimes against civilians and made a video of the shooting of 6 unarmed civilians.

The whole civilized world saw the video where Scorpion members killed 6 Bosniaks in cold blood with no remorse and the world is shocked by the brutality of the crimes.

The Serbian Supreme Court has violated the victims and their families’ human rights and denied justice for those who have been killed. Reducing the sentences to those ho have committed war crimes in Bosnia shows once more the unwillingness of the Serbian government to face the responsibilities of Serbia for its role for the atrocities against Bosniaks in Bosnia and Herzegovina.

At the same time, the Serbian government is illegally holding Bosnian citizen Ilija Jurisic for alleged war crimes committed against combat forces. This trial is contrary to the standards of international humanitarian law. As long as Serbia denies its role in genocide and goes without punishing war criminals there should be serious consideration by the European Union representative for denial of further talks of Serbian membership in the EU.