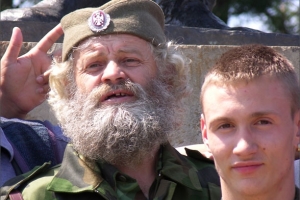 Congress of North American Bosniaks (CNAB), an umbrella organization representing the 350,000 American and Canadian Bosniaks, is urging your immediate action and assistance in regards to the planned gathering of the Chetnik Ravna Gora Movement on the mountain of Ozren in Bosnia and Herzegovina (BiH).

This gathering is being held in honour of the notorious war criminal, Radovan Karadzic, who is facing the International War Crimes tribunal for genocide and crimes against humanity, the leader of worst atrocities in Europe since the Second World War.

We are asking for your support and help in outlawing the existence of such movement in BiH and outside of BiH.

The Chetnik Ravna Gora Movement (CRP) is a well known ideological movement, with the aim of spreading racist propaganda, ethnic hatred, and inciting terrorist activities against non-Serbs in former Yugoslavian states. Recent efforts to rehabilitate the Chetnik movement are especially evident through building of monuments to Draza Mihajlovic, a war criminal and general from the Second World War. The movement celebrates specific dates and acts of atrocities committed against the non-Serbs in Bosnia.

Throughout the Second World War, the Chetnik movement collaborated with the Axis, and the Chetniks ended up fighting the Partisans instead of the occupation forces, and started cooperating with the Axis in their struggle to destroy the resistance, receiving assistance from German forces.

On December 20, 1941, the Chetnik supreme commander at the time, Draza Mihajlovic issued instructions to his commanders. Some significant parts of those instructions include the following language:

Out of 150,000 Bosniaks who lost their lives in World War II, some 100,000 were murdered by Chetniks. During the 1990’s wars in Bosnia and Croatia, Serb paramilitaries often self-identified as Chetniks. Vojislav Šešelj’s Serbian Radical Party formed the White Eagles which was identified as Chetniks and committed numerous atrocities in Bosnia and Croatia. Many countries have banned their gathering and organizing. Moreover, and to our and the civilized world’s utter dismay, the above goals proclaimed by the Chetniks before and during World War II, were quite successfully completed by Serbian forces which ethnically cleansed parts of Bosnia during their aggression from 1992-1995. You will agree that this situation is untenable.

CNAB is warning that in the heart of Europe, in Bosnia, where the genocide and atrocities have been committed against Bosniaks, a Serbian neo-Nazi and fascist movement is gathering strength. We must not let this happen. As much as Bosniaks stood side by the side of the allies fighting Nazis during WWII and fighting the terrorist threat in Europe during recent years, so the western world and democracies must fight the rise of neo-fascist movements such as the Ravna Gora Chetnik. Europe owes it to Bosnia, and especially to future generations, to prevent the falsifying of history and to ensure our civilized society is built on strong foundations.

Please prevent the Republika Srpska from allowing the gathering and help Bosnia to outlaw these types of organizations in Bosnia and Herzegovina.

Thank you for your prompt and decisive attention to this matter.

On behalf of the CNAB
President of the Board of Directors