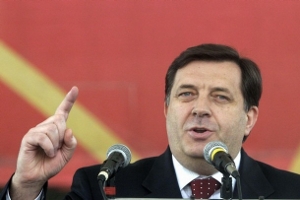 The Honorable David Emerson, P.C., M.P
House of Commons Ottawa, ON K1A 0A6

The Congress of North American Bosniaks (CBNA), an umbrella organization representing 350,000 Bosniaks living in The United States and Canada is writing to you with serious concerns for future of Bosnia and Herzegovina. We welcome the arrest of the notorious war criminal Radovan Karadzic and his immediate extradition to The Hague. This is one of many very much needed positive steps for Bosnia. However, increasingly there are troubling signs of undemocratic processes at play in Bosnia.

The most recent attacks on the principles of liberty, democracy, respect for human rights and the fundamental freedoms and the rule of law have gone unchecked by the international community. Additionally, internal forces from the Republika Srpska entity, a smaller entity created by the bloody ethnic cleansing campaign of Milosevic and Karadzic, are hard at work at destroying Bosnia and the years of work and billions of dollars invested by the international community in Bosnia.

We are calling your attention to some of the troubling signs occurring as a result of unchecked policies created by Milorad Dodik.

Violation of Bosnian sovereignty, its institution, its symbols, and history
The Prime Minister of the smaller entity, Mr. Milorad Dodik?s nationalistic rhetoric goes unchecked. His statements aimed at Bosnia’s sovereignty, its institutions, its history, and the insulting comments for the victims and survivors of the genocide have now effectively reversed a decade of reforms. Mr. Dodik has succeeded in stopping the only true Police reform, initially offered by Mr. Lajcak, the High Representative. Mr. Dodik has set up parallel institutions within the Republika Srpska in an effort to challenge the sovereignty of Bosnia over the territory. He uses every opportunity he has to undermine Bosnia. Dodik’s comments have warranted immediate dismissal on several occasions. However, Bonn powers and the dismissal of Prime Minister Dodik from his position failed to materialize due to inaction by the High Representative. However, Mr. Lajcak was prompt in making sure that the passports of the war criminal Karadzic’s family have been returned to Karadzic’s family.

Violation of human rights and the right to assembly
On several occasions, Milorad Dodik’s police apparatus has prevented the citizens, survivors of some of the most brutal aggression and genocide against civilians, from visiting the place their family members were tortured, murdered and buried. The denial of the right to remember those who have been killed by aggression is in essence a double killing. Denial of the Holocaust is a punishable offense; likewise, denial of the genocide that occurred in Bosnia should also be made a crime.

Violation of religious freedom and failure to protect historical and sacred buildings
There have been many attacks on refugee returnees, attacks and vandalizing of the mosques in Republika Srpska, and threats to imams. Freedom to worship is one of the most fundamental rights and must be protected.

Bosnia and Herzegovina has been a proven partner to the EU, United States in their efforts in Afghanistan, Iraq and anti-terrorism. You, as leaders of the free world and promoters of peace and stability in the region should make sure the international investments as well as freedom and democracy, in Bosnia, are protected. Furthermore, stability is essential to the future of Bosnia and its membership into the EU and NATO. Prime Minister Dodik should be removed from his position immediately and the parallel institutions he has created must be immediately dismantled. We need a comprehensive, sustained, and long term fulfillment of international obligations towards Bosnia and Herzegovina. With Dodik in power in the Republika Srpska entity, peace and progress are impeded in Bosnia. The International community failed to protect Bosnia during the war; will it fail again to stand up for the Bosnia’s right to be a democratic, multi-ethnic state with one central government?

We request your prompt action in this matter.

President of the Board of Directors of CNAB