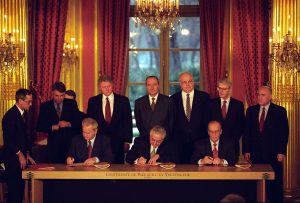 Twenty years ago, in the wake of the genocide in Srebrenica and the surrounding areas of the eastern town in Bosnia and Herzegovina (BiH), the Dayton Peace Accords (DPA) ended a war that killed more than 100,000 people, left between 20,000 and 50,000 women victims of sexual violence, and displaced more than two million around the world.  However, war leaves a lasting effect on society long after weapons are put down, and a long-term plan is necessary to recover a nation.  Although the agreement succeeded in creating the conditions necessary to enforce a settlement, as well as end the war after more than 30 failed cease fires, what emerged was a document that paved the way for a largely dysfunctional government structure that many Bosnian citizens believe is the main obstacle to progress.  The Dayton Accords were designed to end the war, after four failed peace initiatives, but the Accords were not a model for governing a nation that is politically stable and economically prosperous.  The complex, ethnic-based power sharing system of governance that emerged has largely paved way for power to be entrenched with few opportunistic individuals using nationalistic rhetoric to resist reform and block progress, leaving Dayton mostly unchanged and paralyzing the country.

The people of Bosnia and Herzegovina are increasingly frustrated and giving up hope that they will live in a modern democratic society, and many of them trace the current stalemate in the country to November of 1995 and the signing of the DPA.  Peace has relatively endured.  However, in many respects, BiH remains frozen in time, stuck in the nationalist quagmire of the ‘90s.  While the Accords are widely touted as a success and a model peace agreement for today’s conflicts in foreign policy circles, the current political, economic, and social situation in Bosnia tell a much more concerning narrative.  While the main objective was to preserve a single multiethnic state, ethnic tensions persist.  The Accords effectively divided the country along ethnic lines, with the Inter-Entity Boundary Line basically providing a demarcation along the confrontation lines that existed at the end of the war.  The mere existence of the two entities creates an identity crisis in BiH with citizens identifying primarily along ethnic lines instead of as Bosnians and Herzegovinians.  This is particularly stark in contrast to pre-war Bosnia when the three main ethnic groups lived largely mingled together throughout the entirety of Bosnia’s territory.  Since the DPA, however, the ethnic groups have migrated to the two entities primarily along ethnic allegiances, and population estimates show a dramatic shift in today’s Bosnia that is contrary to the centuries old tradition of multiethnic, multicultural, and multireligious society.

Adding fuel to the fire is the fact that Republika Srpska (RS), now with a Serb majority, is mostly comprised of areas that were effectively cleansed of the Bosniak population during the war.  To many, the mere fact of calling the entity by a name which closely translates to “Serb Republic” in the local vernacular recalls the memories of genocide at mention and is regarded by many as tantamount to rewarding genocide.  Mr. Holbrook himself acknowledged this shortfall during the negotiations, regretting he did not make a stronger effort to drop the name and underestimating the danger of retaining the “blood-soaked name.”  The division into two entities paved the way for Serbs nationalists to effectively accomplish through political means what they failed to achieve of the battlefield — create a Serb majority in regions that were ethnically cleansed and then paralyze any efforts of returning refugees to their pre-war homes.  This effectively legitimized the spoils of genocide for Serb nationalists and continues to embolden those calling for secession of these ethnically cleansed areas.  Compounding this is the constant denial of Bosnia and Herzegovina’s sovereignty and its right to exist by Serb leadership, both in Republika Srpska and Serbia, which seeks to weaken and paralyze Bosnia’s central government at every chance presented, and thus the very sovereignty that the DPA was supposed to protect.  Therefore, the Dayton Accords were merely an ephemeral evil which gave birth to political conditions that have been cultivating secession efforts for most of the last two decades.

Orchestrating an agreement to end the fighting in a conflict does not speak to the same tensions that must be addressed when building institutions to heal a country as a whole and move it forward.  The extremely complex system of government emerged in post-Dayton Bosnia which has made governance extremely difficult, and at times impossible.  This has also provided a perfect breeding space for overt ethnic nationalism.  Elite politicians, some of whom had major roles during the war, tout nationalistic rhetoric and take turns playing on the people’s wartime memories and fears of “the other side” to capture office, then use the same nationalistic rhetoric to neglect the duties of the office and interests of the state and to pursue belligerent objectives, stalling much of any potential for reform and progress.

Unemployment in BiH consistently hovers above 40 percent, with the number being particularly staggering among the country’s youth.  This escalates tensions and creates a vacuum in which people retreat into their close circles, typically of one ethnic group or another, clinging onto politicians’ nationalistic rhetoric promising better days following their reelection.  Opportunistic politicians prey on the general public in such situations and play the ethnic card to accomplish their goals.  And the cycle continues.  In the past few years, we have seen significant unrest culminating in mass protests in BiH.  On the face, the protests were largely economic in nature, but a closer examination points that they were a direct result of the paralysis of progress created by the power vacuum that surfaced in the aftermath of Dayton.

Elections are bedrock of a democratic society and an important factor in building a peaceful, multiethnic BiH.  However, in Bosnia and Herzegovina, elections following Dayton have only served to reinforce divisions as the system seems stacked in favor of highly nationalistic candidates with divisive rhetoric.  The complex voting mechanism requiring each political unit to have its own governing body results in the accumulation of about 700 elected state officials and more than 140 ministers in a country approximately the size of West Virginia.  This represents the highest number of government officials per capita in the world.  The fact that there are complex election rules requiring candidates to declare themselves as belonging to one ethnic group or another before even standing for elections further promulgates nationalistic divide and creates an obstacle of achieving a Bosnian-Herzegovinian national identity.

As Americans of Bosnian decent, we urge the United States, as the broker and the guarantor of the DPA, to take a leading role in revising the agreement in order to preserve peace and stability in BIH and the region.  The RS leadership is consistently and persistently undermining the Dayton agreement every chance it gets.  Milorad Dodik, the current president of the RS, continuously denies the Srebrenica genocide, makes threats for secession, and, most recently, called for an illegal referendum regarding the country’s judiciary system.  All of these actions are going unchecked by the Office of the High Representative which has become a shell of its self since the days of Lord Paddy Ashdown. Lack of action by the international community only emboldens the nationalists and separatists to further undermine progress and reforms necessary for full membership in the European Union and NATO.  In fact, the recent events in Crimea and eastern Ukraine are cause for concern as Russia seeks to assert more power in the Balkans, utilizing the Serb nationalists to counter strategic interests of the United States and its allies.   Deferring to local politicians in BiH to resolve these fundamental issues without using the necessary geopolitical leverage in the region will not work.

The United States and its allies cannot wait on the sidelines, as they did in the 90s, while the extremists do everything in their power to destabilize BiH, deterring it from its rightful place in Europe as a key strategic ally of the United States.  On the 20th anniversary of the Dayton Peace Accords, let us preserve the legacy of the historic agreement by repairing its mistakes both in the framework and the implementation mechanisms to ensure lasting peace and stability in BiH and the region.   We strongly believe this can only be done based on true democratic principles respecting the rights of all citizens, and protecting the rights of minorities.  Bosnia and Herzegovina needs a stronger central government, one without the shackles of bureaucracy and ethnic divisions.  A more efficient government will renew people’s faith in their leaders and strengthen the economy.  This will directly reduce the influence of negative nationalist rhetoric in the country, breaking the vicious stalemate.

The shared power and balance at all costs approach for which Dayton has become a symbol may be laudable to some, but it is highly impractical and largely unworkable.  Making a transition from a guided democracy to a full democracy is not easy, but it is not impossible.  There is great need for significant political and policy changes in Bosnia, today more than ever.  Twenty years later, proclaiming that we can improve Dayton does not discredit the good that the peace agreement has created in stopping the bloodshed.  Admitting that the agreement was hastily drafted for the most noble of reasons, to stop war and the killing of people, does not diminish that very accomplishment.

The text was prepared by Adisada Dudic and Hamdija Custovic for the event commemorating the 20th anniversary of the Dayton Peace Agreement (DPA) held in Dayton, OH between 11/19/15 – 11/21/15.   It draws from several texts listed in references.