Skip to Content
Home English CNAB at the 20th Anniversary of the Dayton Agreement Conference in Dayton, OH 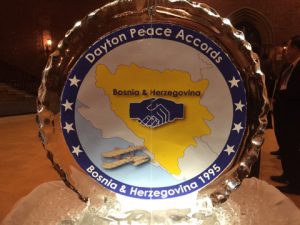 A delegation of the Congress of North American Bosniaks attended a three day conference in Dayton, OH commemorating the 20th anniversary of the signing of the Dayton Peace Accords (DPA) that ended the violent aggression on Bosnia and Herzegovina (BiH) on November 21, 1995.   The conference “Dayton Peace Accords at 20” was held from November 19 – 21 and co-organized by the City of Dayton, Montgomery County, and the University of Dayton, and sponsored by numerous other local organizations.  The conference was attended by many former and current leaders and policy experts, including:

The CNAB delegation was represented by Mr. Hamdija Čustović  (president), Mr. Dino Crnalić (spokesperson), and Ms. Adisada Dudić (member of the Board of Directors).   Mr. Čustović  was a speaker in a panel discussion and voiced concerns and views of the Bosniak community in the U.S. and Canada regarding the lack of reforms in BiH and the continuing secession efforts by the Serb nationalists in the smaller entity of BiH.   He also recognized the value of the DPA in ending the war, but stressed that “the shared power and balance approach of the DPA is highly impractical and largely unworkable” and urged for greater U.S. engagement to expedite the integration of BiH into NATO and the European Union. Mr. Čustović also highlighted that “if you have a straight-jacket on, you’re not going to take it off by yourself.”

The vast majority of the speakers at the conferences agreed that the Dayton agreement itself has contributed to the paralysis of the country’s government and especially its economy, as Bosnia has almost 50% unemployment, with more than 70% young professionals unable to find jobs after graduation.

During his address, former President Clinton talked about the need for the U.S. to do more to provide hope for a better future to many young people who he saw at the Srebrenica genocide commemoration in July.  He announced his full support for a bipartisan bill introduced in the U.S. congress on Thursday to establish an enterprise fund that would provide incentives of about $30 million over 15 years to bring more American investors to the Bosnian economy.

Another topic was the problem of ethnic divisions in Bosnia and discrimination against ordinary citizens who do not belong to any of other ethnic groups including the question of two schools under one roof and the electoral law.   Dr. Rafi Gregorian accentuated that the electoral law must be prioritized for reforms to be in compliance with European standards of democracy and that the DPA still have not been fully implemented which is causing part of issues.   Mr. Edward Joseph of Johns Hopkins University emphasized that while we should talk about the future that we can only move forward after we fix the mistakes of Dayton, stating that the entity of Republika Sprska is a ‘moral abomination’ and therefore can never be allowed to secede.  In reflecting on the DPA process in 1995, several panelists confirmed that the “Republika Sprska” name should not have been allowed to remain, because the entity is not a republic, and can never have the elements of statehood.  Even the late Ambassador Richard Holbrooke stated on several occasions before his untimely death,  that it was one of his biggest regrets that he did not fight harder to change the ‘blood soaked name’.

CNAB would like to thank the organizers of the conference for their hospitality and utmost professionalism.  Special thanks and recognition goes to the co-chairs of the event, Dayton city Commissioner Matt Joseph and John McCance, president and CEO of McCance Consulting Group and the many volunteers for their efforts and passion about bringing lasting peace, stability, and prosperity to Bosnia and Herzegovina.

In commemorating the 20th anniversary of the Dayton Peace Accords, the Congress of North American Bosniaks has published a white paper (CNAB: DAYTON PEACE ACCORDS – TWENTY YEARS LATER) about the legacy of the DPA and the challenges facing Bosnia and Herzegovina today.