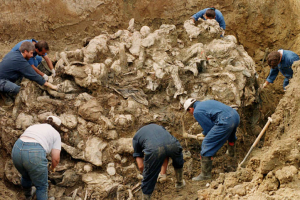 On behalf of the victims and surviving witnesses of the aggression against the Republic of Bosnia and Herzegovina and genocide against Bosniaks, the Congress of North American Bosniaks {CNAB} and the Institute for Research of Genocide, Canada {IGC} reject and condemn inhumane statements by the so called Sheikh Imran Hosein in denying genocide in Srebrenica and the events of the war in Bosnia and Herzegovina, for which he solely blames the West and NATO. His positions are on the trail of conspiracy theories and, as such, conflict with the historical and legal facts regarding the genocide in Srebrenica.

Imran Hosein is otherwise known to the Muslim public for his controversial interpretations of world events rather than for his knowledge of Islamic Studies. In the video that was released a few days ago, and widely promoted by Serbian media, Imran Hosein delivers a shameful and insulting message to Bosniaks, denying that the Serbs intended to commit genocide.

Imran Hosein’s ignorant and pathetic position on Srebrenica which insulted the Bosniak victims is just a part of the campaign by Serbian academic, political, spiritual, and media establishment for the purpose of denying the genocide in Srebrenica and drawing attention away from the 20th anniversary of genocide in the UN “protected zone of Srebrenica.”  Nevertheless, we must warn the public in general that Imran Hosein is a genocide denier and, as such, is persona non grata among the Bosniak people.

We remind that the international courts in The Hague (ICTY and ICJ) ruled long ago that genocide was committed in Srebrenica, while the US Congress and Senate, Canadian Parliament, the Australian Parliament, and the European Parliament have all called this worst crime in Europe since the Second World War genocide. Moreover, there is a general consensus among experts in the study of genocide that the systematic killing of more than 8,372 Bosniaks in Srebrenica is an act of genocide. Diverting attention from these facts is nothing but an attempt to absolve Serb leadership and the perpetrators of genocide from the responsibility of their deliberate actions during the aggression on Bosnia and Herzegovina between 1992 and 1995.

We ask the Islamic Community of Bosnia and Herzegovina to issue a public condemnation of Imran Hussein’s genocide denying remarks to prohibit him from visiting and speaking to the Bosniak Islamic centers in Bosnia and diaspora, and to call upon the faithful Bosniaks not to attend his lectures.