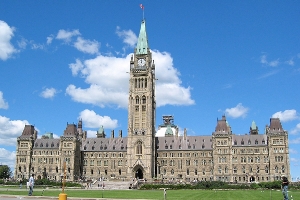 Institute for Research of Genocide Canada {IGC} and the Congress of North American Bosniaks {CNAB} were iinformed  today that the Canadian Parliament unanimously adopted a second resolution on the genocide in Srebrenica and BiH. The first resolution was adopted on 19 October 2010. The second resolution confirms the previous resolution M-416, 11 July is confirmed as Srebrenica Genocide Remembrance Day in Canada. The genocide in Srebrenica together with several other genocides in the 20th century will be commemorated and studied every year in the month of April, which is the month set aside for remembering and fighting against genocide.

Mr. Brad Butt as a member of the ruling parliamentary party ( the Conservative Party of Canada), on 26 March, 2015 has proposed a resolution M-587 to  Parliament of Canada, which speaks of all genocides in the 20th century, except for the Srebrenica genocide. Canadian Bosniak community was first informed about this shameful humiliating resolution for victims on 22 April, 2015 from the office of Irwin Cotler, Member of Parliament and Canada, of the Liberal Party of Canada, one of the leading activist for human rights and freedoms in Canada and a great friend of Bosnia and Herzegovina.

At the same time the letter with the requirements of the Canadian Bosniak community were sent to all the leaders of all of parliamentary political parties and other prominent scientific and cultural entities in Canada. They also informed the relevant political authorities in Bosnia and Herzegovina, Bosnian Embassy in Canada and the Club of Friends of Bosnia and Herzegovina in the Parliament of Canada.

Institute for Research of Genocide Canada, through members of the International Expert Team met public letter in which among other things says:

“Canada, as a member of the international community has a duty to uphold the judgment of the International Court of Justice and the International Criminal Tribunal for former Yugoslavia, and to accept the court decision and to implement that decision. Canada needs to have respect for their own resolution M-416, unanimously adopted by the Parliament of Canada confirming that genocide occurred against Bosniaks in the UN protected area – Srebrenica. Canada, as a sovereign parliamentary democracy has a responsibility to respect international law and accept information regarding the Srebrenica genocide which were recorded and have been through the court process. Canadian Bosniaks unconditionally seek change the text of the proposed resolution M-587, which again inflicts pain and suffering survivors. Bosniaks in Canada will never accept a resolution that does not contain the term genocide in Srebrenica. Resolution no genocide in Srebrenica is an insult not only to the Canadian Bosniaks, victims of genocide, but also for man and civilization in general, for Canada and the entire free world. Canadian Bosniaks will not negotiate a resolution that does not include the genocide in Srebrenica. ”

In his statement Professor Ramic, among other things said that: “The Bosniak community in Canada, and many Canadians are unpleasantly surprised that Srebrenica genocide was not entered in the text of the resolution which talks about the greatest genocide in the 20th century. This act that humiliates the victim biggest crime after the Holocaust in Europe negatively affects the reputation of Canada in the international arena. I urge the Canadian Parliament to correct the error and to bring Canada back on the road of countries fighting for the truth about the crimes committed in Bosnia and Herzegovina and justice for the victims of these crimes.”

A few days later, Brian Masse, sponsor of the first genocide in Srebrenica, which was back in 2010, was adopted by the Canadian Parliament has proposed a new resolution.

That, in the opinion of the House, and in advance of the twentieth anniversary of the Srebrenica genocide on 11 July 2015, Parliament should (a)  reaffirm support for former Motion M-416 passed in the House of Commons on 19 October 2010, which recognized July 11 annually as Srebrenica Remembrance Day in Canada, and (b) include the Srebrenica genocide, and Srebrenica Remembrance Day, as part of “Genocide Remembrance, Condemnation and Awareness Month” every April going forth as supported by the House in Motion M-587 passed by Parliament 24 April 2015.

IGC and CNAB would espcially like to thank the Canadian member of Parliament Brian Masse, the sponsor of this resolution, a great friend of Bosniaks and Bosnia and Herzegovina. Also, thank you to Irwin Cotler and Stephen Dion, members of the Canadian Parliament who publicly in parliament also talked about the genocide in Srebrenica. IGC and CNAB thank all activisits who lobbied for this resolution.