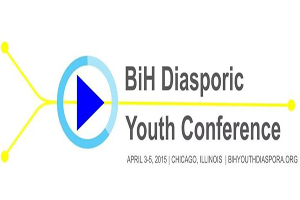 The 2015 BiH Diasporic Youth Conference will be hosted on April 4th, 2015, at Oakton Community College with the closing plenary occurring on April 5th, 2015, at the Skokie Theatre.  This conference has been put together by the Bosnian-American Genocide Institute (BAGI) and by a small group of Bosnian young people living in Chicago, Washington and Toronto. The main theme, Deep Roots Building Sturdy Bridges, focuses on our shared roots and the creation of bridges from our commonalities and differences.

The BiH Diasporic Youth Conference (BiHDYC) aims to be the first of its kind, bringing together a young generation of diaspora – a generation that, for the most part, has spent the majority of its life living in the US and Canada. Through our youth-driven endeavor, we hope to draw a new type of audience, forge strong relationships and facilitate an inclusive environment for discourse.. As we continue to build the site, we will soon have information and bios of our organizers and volunteers posted on the web site.

Tea Sefer (Washington, D.C)
Tea knew she cared about social justice before she was completely aware of what that would mean for her future. Born in Smederevo at the beginning of the war, Tea naturally embraced becoming a grassroots political organizer as a teenager in Chicago, Illinois. She continues to work in social justice in Washington, DC, where she works on state reproductive health policy.

Nura Eston (Toronto)
Born in Toronto, Nura’s background in sociology and public relations has found her embracing the Bosnian and Herzegovinian culture in numerous ways: from papers on genocide, to being on a team that gathered Bosnian language books for a Mississauga (just outside of Toronto) public library and to numerous cultural events including Dan Žena and Naša Nova in Toronto. Nura’s professional background has brought her to our endeavor, lending her marketing and event planning expertise.

Ida SeferRoche (Chicago)
Ida grew up in Bosnia and Herzegovina during the war in the early nineties. She is very passionate about social justice and the Bosnian community. She received a Master of Arts in Women’s and Gender Studies and a Master of Social Work from Loyola University Chicago. She is currently a board member for the Bosnian-American Genocide Institute and Education Center in Chicago and the Advisory Council of Bosnia and Herzegovina. Ida teaches at Oakton Community College and North Central College. In her spare time, she also develops art workshops for youth with the InTransit Empowerment Project, an organization that uses art to empower immigrants and refugees.

Sanja Seferovic Drnovsek (Chicago)
Sanja is an educator at Chicago Public Schools. She holds a Master of Arts in Teaching with an emphasis on Social Science and ESL. Her educational and professional backgrounds are in law; she holds a J.D. degree in regional law. She is the president of the Bosnian-American Genocide Institute and Education Center (BAGI) and a member of the Illinois Holocaust and Genocide Commission.

We will be posting additional biographies very shortly.

BiHDYC 2015
The Conference vision is divided into the following two (2) categories:

SOLIDARITY
To build solidarity among youth on the following universal values:

EDUCATION
To facilitate dialogue among youth about prejudice, encouraging critical thinking about history, perceived norms and new ideas in hopes of laying a foundation for pluralistic and democratic discourse about Bosnia and Herzegovina.

CONFERENCE VALUES
Our conference is built on the following three (3) values:

Collaboration: We are devoted to the idea that we are stronger together. Our lived and learned experiences contribute to a stronger and varied discourse.

Ambition: We are committed to setting high goals and being surrounded by those who are driven.

Diversity and inclusiveness: We are dedicated to creating safe, inclusive spaces based on a foundation of multi-ethnic discourse and thought.