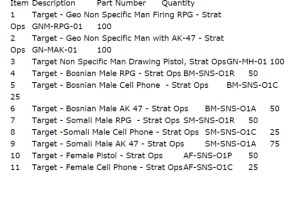 We are writing to you as representatives of the Canadian Bosniak community regarding the information that the Canadian government is purchasing 600+ targets on behalf of the British government. These targets are intended be used in Alberta at CFB Suffield, for live fire operations. We are extremely disappointed that some of the targets carry names like “Bosnian male.”

This is an insult to more than 30,000 members of the Canadian Bosniak community, most of who arrived in this country as victims of genocide, ethnic cleansing, and crimes against humanity during the war of aggression against Bosnia and Herzegovina in the 1990s.  This year, we will commemorate twenty years since the Srebrenica Genocide, the single worst atrocity in Europe, since the Holocaust.  It is therefore even more hurtful that the surviving victims of this genocide are subjected to the humiliation of their identity being used as a “target”.

This act of naming the targets as “Bosnian male” is completely unnecessary in Canada, a country that is proud of its cultural mosaic. Furthermore, these actions are hurtful to many outstanding and exemplary Canadian Bosniaks, those who immigrated to this great country as well as the growing generation of Bosniaks who are born as Canadian citizens.

We stand behind the Canadian National Defence and the armed forces in their efforts to protect our fellow citizens. However, we feel the naming of the targets as a completely unnecessary, hurtful, and a shockingly prejudiced act. It also sends the wrong message to the citizens of Bosnia and Herzegovina who greatly value the friendship of the Canadian government and its people.

On behalf of the Canadian Bosniaks, we respectfully ask for an explanation, immediate retraction and an apology for these actions.  Bosnians are a peaceful, freedom loving people who cherish democratic values and human rights, above all.

As loyal and proud citizens of this great nation, we urge our government to help us against prejudice and inequality, in our efforts to become even greater contributors to the wellbeing of the Canadian society.