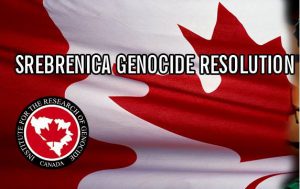 Institute for Research of Genocide Canada {IGC} invites all citizens of Bosnia and Herzegovina in Canada, all Canadians friends who know the truth about the aggression on Bosnia and Herzegovina and genocide against its citizens, and friends of justice for the victims of the biggest massacres after the Holocaust in Europe to massively participate in the so far largest action of Canadian Bosnians. The action is being held in the parliament of all Canadian provinces and territories to support and adopt a resolution on the Srebrenica genocide and to declare July 11 the day of remembrance of the victims of this genocide. This action is based on the resolution on the genocide in Srebrenica, which was adopted by the Canadian Federal Parliament, and who have expressed their support through the Canadian Museum for Human Rights with the tenet of the genocide in Srebrenica.

With this action IGC is observing the 20th anniversary of the genocide committed in the Bosnian city of Srebrenica in July 1995, and expressing support for the designation of “Srebrenica Remembrance Day” in Canada.

The action among other things, states the following:

– solemnly observes the 20th anniversary of the Srebrenica genocide;

– supports the designation of ”Srebrenica Remembrance Day” in Canada;

– commends the official bodies that have recognized the Srebrenica genocide, including the Canadian Parliament, American Congress and Senate, European Parliament, which declared a Srebrenica Remembrance Day in the European Union;

– extends its condolences to the families and friends of those who died at Srebrenica in July 1995, and during the conflict in Bosnia and Herzegovina from 1992 to 1995;

– reaffirms its support for the independence and territorial integrity of Bosnia and Herzegovina, peace and stability in southeastern Europe as a whole, and the right of all people living in the region, regardless of national, racial, ethnic or religious background, to return to their homes and enjoy the benefits of democratic institutions, the rule of law, and economic opportunity, as well as to know the fate of missing relatives and friends.

Date
Declare July 11 as Bosnian Genocide Remembrance Day in {name of your Canadian province or territory}
Send To: {name and address of the your member of the parliament of your Canadian province or territory}
On behalf of the Canadian Bosnians, victims of genocide in Bosnia and Herzegovina and on behalf of Canadians friends of truth and justice I would like your support as a sponsor for resolution declaring July 11, as Bosnian Genocide Remembrance Day. I would like this to be a day on which the victims of the 1992-1995 Bosnian Genocide would be remembered and honored by the people of {name of your Canadian province or territory}.
The Canadian parliament passed the motion in 2010 establishing the Srebrenica Remembrance Day in Canada. This anniversary raises awareness of the tragic suffering of the people of Bosnia and Herzegovina and honors and remembers those who were killed as a result of the policies of genocide, ethnic cleansing, and war crimes carried out in Bosnia and Herzegovina from 1992 to 1995. With this declaration, Canada acknowledges the importance of this event in helping to bring closure for the Bosnian people through truth and justice. The institutionalization of Srebrenica Remembrance Day every July 11 will help to inform future generations and assist all of us to work towards peaceful coexistence.
In Canadian National Museum of Human Rights in Winnipeg since September, 2014 is the permanent exhibition remembering the genocide in Srebrenica.
July 11, 2015 is commemorated as the 20th anniversary or the Srebrenica Genocide in which at least 8,372 innocent and defenseless Bosnian civilians, including children, were summarily executed, hundreds of women and girls were systematically raped and sexually molested, and at least 30,000 inhabitants were forcefully expelled from their ancestral homes in the worst atrocity in Europe since the Holocaust. Similar brutal campaigns of mass murder, detention and torture of civilians in concentration and rape camps, large-scale forced expulsions of inhabitants from their ancestral homes, and mass destruction of religiously and culturally significant structures and objects were organized and committed against Bosnian civilians in cities, towns, and villages across Bosnia and Herzegovina most notably in Sarajevo, Prijedor, Banja Luka, Bijeljina, Zvornik, Rogatica, Vlasenica, Bratunac, Foca, and Visegrad. This anniversary presents an opportunity to raise awareness of the genocide committed in Bosnia-Herzegovina and to remember and honor the victims who lost their lives as a result of the premeditated policies of aggression, extirpation, and carving out ethnically pure territorial areas by the use of terror, force, and ethnic cleansing.
The citizens of {name of your Canadian province or territory} are united in their condemnation of genocide, war crimes, and crimes against humanity and seek that those responsible for the aforementioned crimes be brought to justice. Therefore {name of your Canadian province or territory} designates July 11, 2015 as Bosnian Genocide Remembrance Day.
{Your name and address}