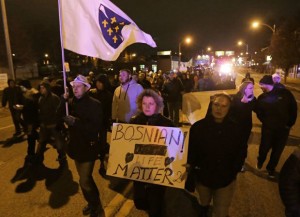 Let me tell you about my Bosnians.

My Bosnians are survivors. After a genocide that killed what would be the equivalent of 15 million Americans as the world watched — no, facilitated — they picked themselves up and put their lives back together. After a genocide in the late 20th century that featured barbarity rivaling the worst excesses of World War II — concentration camps where men were forced to castrate each other, men forced to rape their granddaughters, babies cut from women’s wombs and smashed against trees, entire villages burned to ashes — there was no Katie Couric or Oprah Winfrey to listen to survivors’ stories, no commission to see what went wrong, no funds set aside to reimburse people for losses. My Bosnians picked themselves up and put their lives back together.

My Bosnians are not defined as victims. They understand that dwelling in the past hurts themselves. Even now, 20 years on, as mass graves continue to be discovered in Bosnia, and bodies — or body parts — are identified through DNA testing, dashing hopes that loved ones may have survived, my Bosnians bury their relatives in dignity and don’t speak of hatred toward the perpetrators of genocide.

My Bosnians are hard-working. The vast majority of Bosnians in St. Louis go to work every day, sometimes working two or more jobs, more often than not very physically demanding. Many have worked and saved to open their own small businesses. Contrary to popular belief, refugees — Bosnians as well as other nationalities — pay taxes, and do not receive special benefits. They must start repaying our government the cost of their one-way ticket to the U.S. government six months after arrival, just like a student loan.

My Bosnians are hospitable. A visitor to a Bosnian home will be welcomed as royalty, no matter what the economic means. Guests are considered special blessings. Shortly after the genocide, Bosnians in St. Louis collected money and bought me a round-trip ticket to Bosnia so I could see their country, as I had been expressing such a desire. I was there for a month, visiting dozens of families — relatives of refugees here. While visiting one family in a refugee camp, I was given the one can of soda the family had, and was offered the one chair, while the family drank water and sat on the floor.

My Bosnians are generous. Funds are collected within the local Bosnian community constantly, for orphaned children and ill people in Bosnia, to rebuild churches and mosques that were destroyed there, as well as local needs such as funeral costs. The generosity isn’t limited to Bosnian causes. The local community has done fundraisers to benefit Backstoppers, as well as victims of Katrina and the Joplin tornado. A contingent of Bosnian volunteers went to Joplin from St. Louis to help after the tornado.

My Bosnians are funny, often with a dark humor. They will say, seeing a friend after a long absence, “You’re as rare as coffee,” referring to the unavailability of Bosnians’ beloved coffee during the genocide.

My Bosnians are strong, physically and emotionally. They can make quick work of tearing up and laying a new driveway as easily as they can take tragic news with dignified sorrow.

My Bosnians are multicultural in the true sense of the word, having come from a very ethnically and religiously diverse country, where the motto was “Brotherhood and Unity,” before the genocidaires took over. However, they understand the danger of “balkanization,” (an ironic neologism if there ever was one). When people divide themselves into groups instead of focusing on their similarities, misfortune is bound to follow.

The Bosnian community lost one of its members this week in a horrific murder of unspeakable brutality. My Bosnians wonder where the outrage is after this. I participated in a peaceful march Monday to honor the memory of Zemir Begic for one mile along Gravois Avenue in a light freezing rain with meager media coverage. Some chanted “Peace for everybody!” and “Bosnian lives matter!”

After pathetic attempts at “peacekeeping” by the international community during the Bosnian genocide and peace agreements that seem to reward the perpetrators, and senseless violence here, some wonder if Bosnian lives do matter.

St. Louis is home to the largest community of Bosnians in the world outside Bosnia. They are grateful to have been given a chance of a new life here and have enriched St. Louis in countless ways.

July 11, 2015, marks the 20th anniversary of Bosnia’s equivalent of 9/11 — the Srebrenica massacre, in which some 8,000 men and boys were systematically killed. This next year will be a stressful and emotional time for my Bosnians, as they will be reminded of the terrible time. It is my hope that we can help them — and all refugees — to feel that they are safe and welcome here, and belong in the fabric of our city. We are all one community, and we are all the richer if we can embrace this idea.

Ron Klutho has worked with the Bosnian community for over 20 years, formerly as co-director of St. Pius V Church’s Refugee Support Program, and currently as coordinator of the Refugee and Immigrant Program at Places for People.