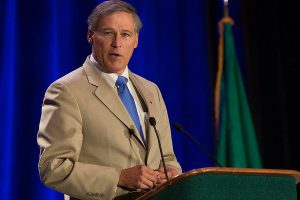 The Congress of North American Bosniaks (CNAB) sent a letter regarding the desecration of Bosniak Muslim cemetery in Snohomish County to Governor Inslee.  Below is the text of the letter:

We are writing to you on behalf of more than 300,000 Bosniak Americans, many of whom live in the great state of Washington, to express our concerns regarding the desecration of the Bosniak Islamic cemetery in Snohomish County, Washington.  On November 20, 2014, the Bosniak community was shocked to find many headstones and memorials at the Snohomish County cemetery completely destroyed by vandals.  Because the Christian part of the cemetery was not harmed, we have a strong reason to believe this case of vandalism is not a random act, but a targeted hate crime against the Muslim members of the community.

Most Bosniak Americans are survivors of the war and genocide in Bosnia and Herzegovina, and came to the United States in the 1990s and early 2000s in hopes of finding peace and stability, and to start new lives in the land of freedom and opportunity.  We were welcomed with open arms by the American people, and have worked hard to successfully integrate into our communities.  As a result, Bosniak Americans have built vibrant communities in the U.S. on the basis of respect, tolerance, understanding, and a deep appreciation for American values.   We love this country and many of us have also served in the line of duty to protect the freedoms and values we hold dearly as our own.

Governor, we respectfully ask you to do everything in your power to ensure that the law enforcement agencies in your state find those responsible for this terrible crime.  It is very unsettling to be victims of a hate crime, knowing that there are still some in our country who want to intimidate and promote violence against entire groups of people.  Racism, prejudice, xenophobia, islamophobia, and many other forms of intolerance do not have a place in our society, and any acts of violence against living or the dead should be punished and those responsible brought to justice.

Thank you very much for all you do to promote tolerance and understanding and ensure the rule of law and justice in the beautiful state of Washington.

Hamdija Custovic, President of the Board
Congress of North American Bosniaks (CNAB)